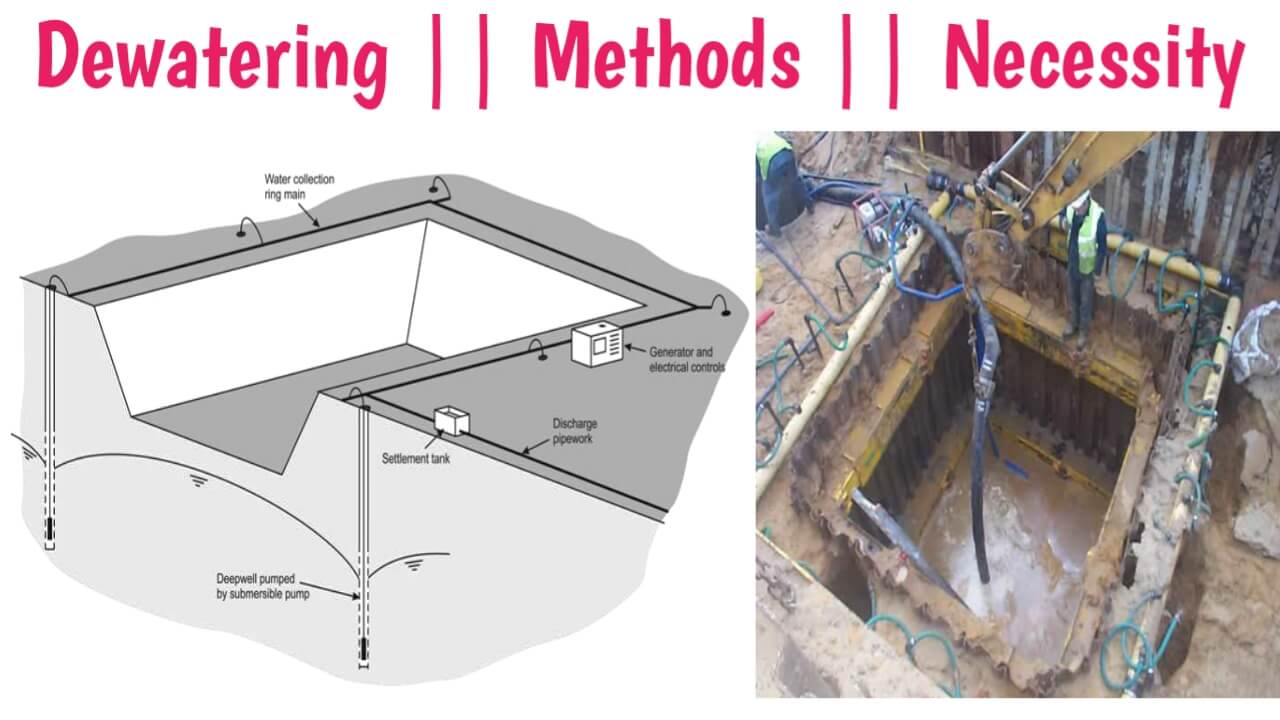 In which situation dewatering is required?

Dewatering is required for the safety of the structure around the pit in the following conditions:

The various methods of dewatering are as follows:

In this methods of dewatering water is disposed by adjusting the pump of the trench. Centrifugal pumps are generally more useful.

This method is used for shallow bases in waterlogged areas. In this way ditches are dug on both sides of the trench. The ditches size is usually 20 cm in diameter of a semicircle.

Sumps are made at a distance of 40 m to 60 m in the ditches. The size of the Sumps (latch) is kept as 1m x 1m x1m.  The water flows into the ditches and collects in the Sumps. Water is pumped out from the Sumps continuously.

This methods of dewatering is more suitable when digging operation (digging trench)  is lower than water table or artesian water present in soil. This method is useful when the groundwater level needs to be lowered further.

In this methods of dewatering, a wall of frozen clay is made by, freezing the moist soil of the area where the excavation is to be carried out.

The process of freezing method of dewatering is as follows:

The following precautions should be taken in the method of freezing:

The following points should be kept in mind while choosing chemicals.

The following points should be kept in mind in case of grouting:

There are no standard rules for depth, diameter, spacing of holes. The depth, direction, bending angle, etc. of the hole varies according to the type of stone.

Cement grout should be easily workable and uniform.  Generally 30 to 90 liters of water is used for 1 bag of cement. The grout should not contain cement lumps. Grouting pressure should be maintained according to the cracks in the stone. Portland cement grout is only useful for cracks up to 1.6 mm wide.

Then the cement slurry is forcibly inserted in the pipe through which the water has inserted.

This is how a waterproof layer is formed by forcibly inserting grout into the soil around the channel. And that way the springs of water in the base trenches can be stopped.

In this methods of dewatering the ground water flow is diverted into deep well-points in the ground and the part to be excavated is kept free from ground water.

Well points are prepared at a distance of about 1m around the area to be excavated.

The important parts of a well point system are as follows:

The pipe that connects the riser to the header is called swinger arm.

The following Procedure is adopted in the well point:

There are three types of well point system:

Water can be lifted from a depth of 5 m with a suction pump. Therefore this method is used where the depth of excavation does not exceed 5 m.  The plant is not disturbed until the excavation work is completely completed.

When excavation depth is more than 5 m below ground level (W.T.), well-point system is done in phases.

Precautions to be taken in well point system:

Pumping rate should be higher than the flow rate of water coming from the surrounding land, Which causes early water table can be lowered.

All well-point connections should be air tight.

The slope of all pipes should be kept in the direction of the pump set so that no air lock is created.

Multiple well point systems should use deep well pumps when the slope of the excavation sides is not stable.  Such pumps should be used only for important works as they are expensive.

Subscribe to our weekly newsletter below and never miss the latest article or an exclusive offer.