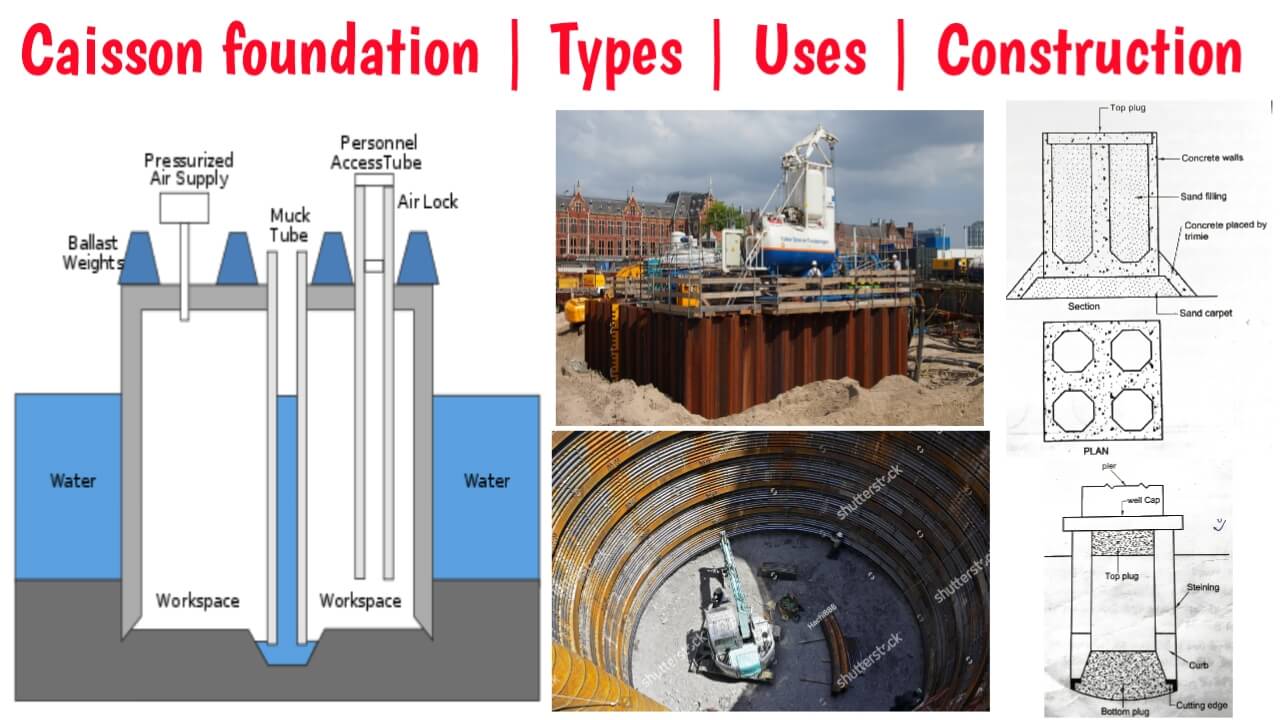 What is a caisson foundation?

Caisson is defined as Structures that are poured into water or soil to remove water or semi-liquid material during foundation excavation and eventually become a permanent part of the underlying structure.

Caisson is used for excavation of river bridge foundations, pillars, abutments, or for protection of shore, for construction of push-ups, construction of lighthouses, etc.  Caisson remains on the excavation site and eventually becomes part of the permanent construction.

Caisson is made of steel, R.C.C., wood or embroidered iron. Wood is not used as it is relatively expensive and prone to fire. R.C.C caisson is heavy in weight, making it difficult to handle and float.

The steel caisson is considered to be the most suitable caisson. Steel caisson is usually made in double skin and the cavity between the skin is filled with plain concrete.

Uses or function of caissons foundation are as follows.

The main types of caisson foundation are as follows.

This type of caisson is open at the head and closed at the bottom. It is made of wood, reinforcement or steel.

Box caisson foundation is used where the hard layer is at a shallow depth and the water depth is shallow. Such caissons are used for fewer loads. This type of caisson is used for the construction of Quay walls, breakwater, etc.

Open caisson or well foundation is also called well. This type of caisson is exposed at the head and bottom. They are made of wood, steel, reinforced concrete or masonry. Such caissons are used as foundations of bridges and buildings.

Open caissons come in different shapes. It has a cutting edge at the bottom. So that it is easy to sink the well.

The shape of the well is determined on the basis of the following.

The different shapes of the well caisson are given below:

The advantages of a circular well are as follows:

Types of open caisson (well) are as follows:

This type of caisson is closed at the head and open at the bottom. Some part of its bottom is free from external environment. This part is called the working chamber.

Why caisson foundation is used?

Caisson is used for various purposes. some are listed below.
1. To remove water or semi-liquid material for the underwater foundation construction.
2. To transfer the load
3. To construct deep shafts or tunnels
4. for placing of machinery underwater

What is the difference between a caisson and a pile?

Pile is a type of deep foundation which is used to transfer load of super structure to ground soil. NOS of piles are used to construct single foundation.

While,
Caisson foundation is used to construct foundation in Underwater. Steel or other material Box inserted in underwater soil to act as water barrier. And then the Box is fill with concrete when foundation get its required depth.

What is the difference between cofferdam and caisson?

The basic difference is, Cofferdam is a Temporary Foundation where the Caisson is Permanent Foundation.