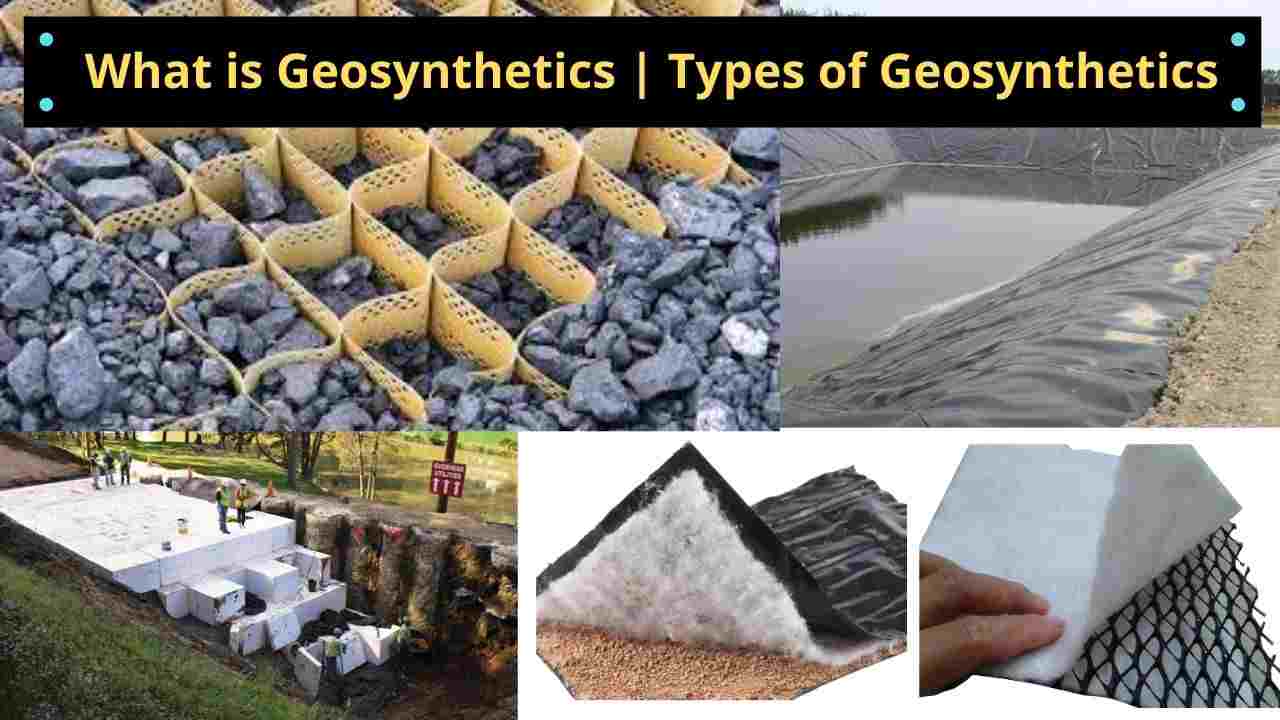 Geosynthetics are the key components of a system or structure that is used to achieve various engineering aspects or purpose.

From the name we can understand, the synthetic material which is used to increase the stability of soil is known as geosynthetics.

Geosynthetics material is the most suitable material for inside ground usage due to its synthetics nature and high durability of that material.

The main objective of geosynthetics material is to increase the stability or strength of soil and to reduce cost of construction.

The Primary Functions of Gyosynthetics are listed below:

As a result, steep slopes can be constructed or an embankment of increased height be built on soft soil, which otherwise would not have been possible.

Geosynthetics are useful to separate dissimilar soils. A separator helps prevent intermixing of poor in situ soil with good quality granular materials when the structure is subjected to surface loading.

It acts as a barrier to the migration of particles between two dissimilar soils, a requirement in many applications such as pavements, graded filters, clay covers, and liners in landfills, etc.

Also read: How to construct Foundation in Black Cotton Soil

Geosynthetics such as geotextiles allow the movement of a liquid across the plane of geotextile while retaining the soil on the upstream side.

To achieve this, the material should meet conditions of both adequate permeability, requiring an open fabric structure, and soil retention requiring a small opening size.

The long-term soil to geotextile flow compatibility is also important in that the filter must not clog excessively during its lifetime.

The drainage function of geotextiles enables flow in the plane of geotextile. Apart from geotextiles that transmit the fluids, nowadays, their specific products such as geonets and drainage composite meet drainage requirements.

the classification of geosynthetics based on materials are listed below.

Geotextiles are the synthetics products that consist of thin & strong membrane fabric.

Geotextiles are made from synthetic fibers such as cotton, wool, or silk, etc.

Geotextiles are made of flexible, porous fabric by standard weaving machinery or matted together in a random, or nonwoven manner.

Geotextiles are used in soil for separation, reinforcement, filtration, and drainage purposes.

Mostly geotextiles are used in soil for drainage function. And it is mostly used in road construction to make it more strong and durable.

Also Read: What is Stub Column?

Geogrids are used for reinforcement purposes in soil, and it is commonly used in subbase of roads pavements.

Geogrids are made of a polymeric material such as polyester, polyvinyl alcohol, polyethylene or propylene.

Geogrid materials are strong in tension and it transfers or distributes the load on large areas of soil surface which increases the stability of the soil.

Geomembranes are the impervious thin sheets of plastic material that are used to cover liquid or solid storage.

Geomembranes are the most used geosynthetics material. And the main function of a geomembrane is to act like a liquid or vapor barrier.

Geocells are the three-dimensional honeycomb cellular structured synthetic material that is filled with compacted soil to form a confined system.

In research of geocell, it is found that geocell confined gravel bases are equivalent to the twice thickness of unreinforced gravel bases. And geocells are much better than geotextiles or geogrids.

Geosynthetic clay liner consists of a liquid barrier material such as bentonite or other very low permeability material that is sandwiched between two geotextiles or bonded to a geomembrane with the help of needle punching or adhesives materials.

It was the newest subset of geosynthetics materials. And it was used as a water barrier.

Geofoams are lightweight large blocks that are made by processing polystyrene into a foam.

This was a lightweight and thermally insulating mass that is buried in the soil to achieve various engineering functions.

Geopipes are the type of geosynthetics material that is made from perforated or solid polymeric pipes and used for the drainage purpose of liquid or gas.

Also any one of these three materials can be combined with another synthetic material such as soil.

Benefits of Geosynthetics in roads

Advantages of geosynthetics use in roads are as follows: