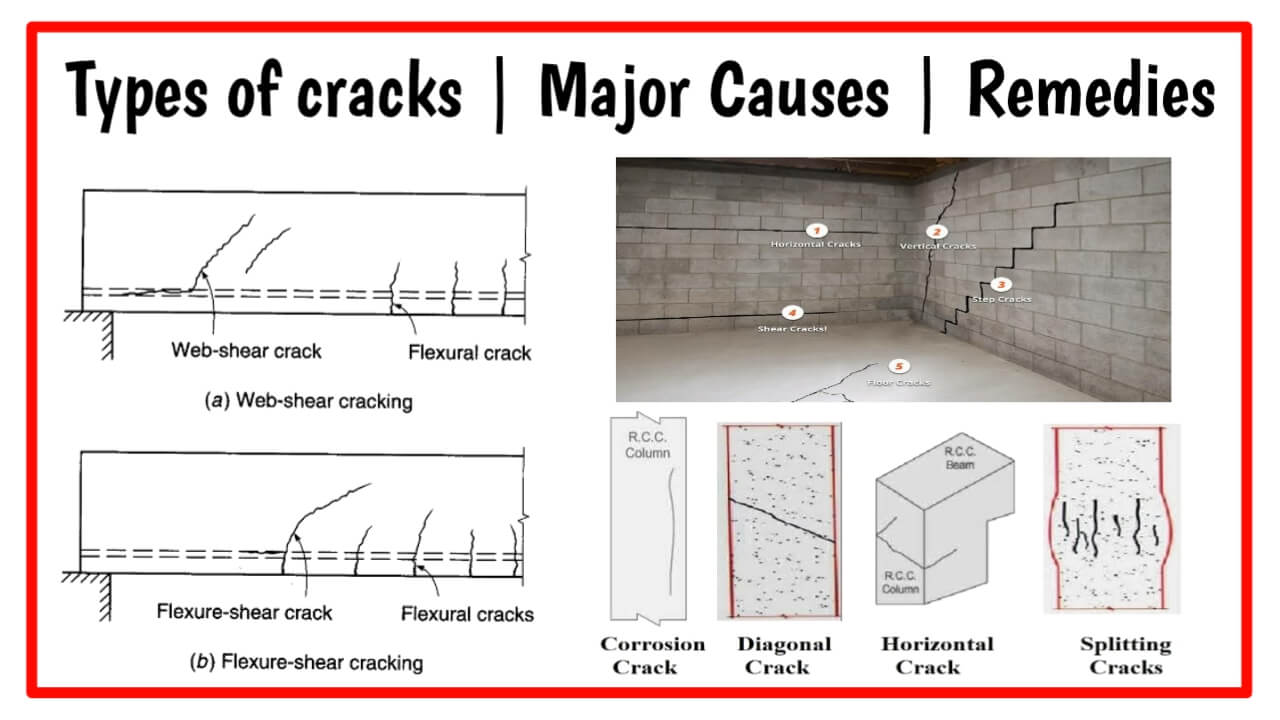 Cracks can be divided into two main groups.

Cracks can be classified as follows on the basis of durability and width of serviceability:

The internal reaction force in the structural members are compressive, tensile or shear type.  Masonry, concrete or mortar are Strong in compression But weak in tension or shear.

This causes cracks in the structural member due to tension or shear.

Do You Know: Arrangement of Transverse Reinforcement in Column

The main causes of cracks in houses are as follows:

Most building materials such as concrete, bricks, mortar, stones, wood, etc. expand and shrink as moisture enters. This movement is reversible.

When the cement based product dries, the absorbed water is first removed, thus reducing the size and shrinking of concrete.  This type of contraction is variable.  But as capillary water is removed from such a cement product, the size decreases and shrinkage occurs which is irreversible.

All porous materials expand when exposed to water and shrink as water is removed.  But, irreversible compression occurs only once in the product, during construction.

The initial shrinkage in cement concrete or mortar depends on the following factors.

As the amount of water in the concrete increases, the shrinkage increases.

If the maximum possible size of aggregate and good grading is used in concrete, the water requirement decreases for the required workability. Due to that the porosity of the concrete decreases and the shrinkage decreases.

Drying shrinkage is reduced if the concrete is cured properly for 7 to 10 days.  Steam curing reduces shrinkage.

Using excessive fine aggregates such as silt, clay, dust, etc. increases the specific surface area of ​​the aggregate so that water requirement increases and Shrinkage increases.

The proportion of fine aggregate (silt, clay, dust) in the aggregate should not exceed 3%.

What is a Shrinkage cracks in concrete?

Tensile stress produces in a concrete due to contraction of concrete, bricks, or mortar.

If this tensile stress is greater than material strength, causing cracks in a material. Such cracks is known as a shrinkage cracks.

Do You Know: What is Monolithic Construction Technology

It is a well-known law of science that each material expands and shrinks as the temperature decreases or increases.

ut, if there is a barrier to this expansion or contraction therefore internal stress arises in the material and causes cracks in concrete due to tension or shear.

The following examples are needed to prevent cracks in concrete caused by temperature changes:

When the load on the walls is not evenly distributed, different stresses are produced in different parts and cracks appear.

When the span of a beam or slab is long and the load at the end is low, deflection causes cracks in the support walls.

Cracks occur when there is a big difference in the elastic properties of two materials and when two such materials are used side by side in construction.

Creep depend on the amount of water and cement in the concrete, water-cement ratio, temperature, humidity, age of the concrete, etc.

If there is weak mortar used in brick masonry. Creep occurs more.

Creep causes deformation in building. Due to that cracks occur in the concrete.

The following measures should be taken to prevent cracks in concrete from creep, elastic deformation and shrinkage:

The main chemical processes are as follows:

Measures to prevent the effects of the chemical reaction:

6. Foundation movement and settlement of soil:

In such a situation, the design of the structure should be done keeping in view the engineering principles and good practice.

Development of vegetation such as crops, plants, small trees, roots of trees, etc. below the foundation, near the wall, and compound wall causes cracks in building elements.

The following measures should be taken to prevent cracks in concrete arising from vegetation: