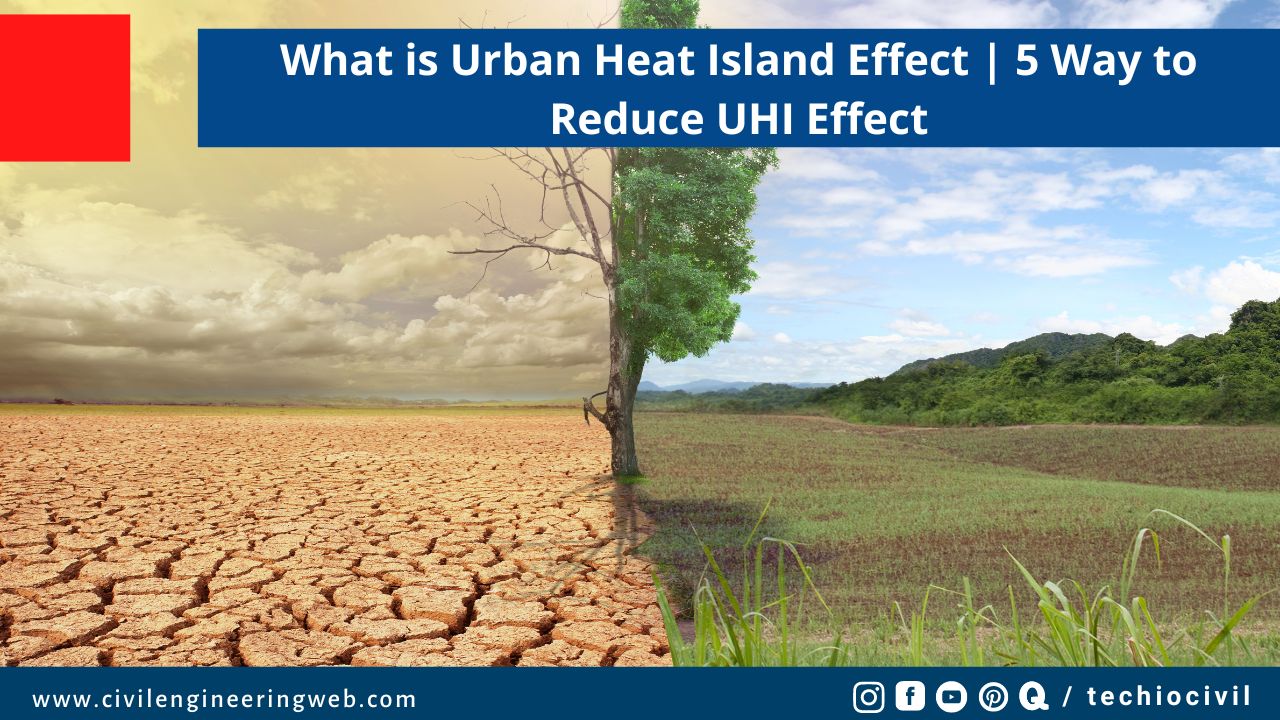 So please read the article till the end, comment and share with your friends if you get any valuable information from this article. Let’s Start.

Now, a day global warming is becoming a very critical problem for every country. And Urban heat island is one of the component of global warming which increase the global temperature day by day.

That’s why if you getting any useful information from this article than please share with your friends to create awareness about it in our society.

What is Urban Heat Island Effect?

In your every travel journey, when you travel from rural area to urban area, i hope you noticed that in rural areas atmosphere is cool and temperature is less while when you come into the urban are you feel that the day is very or the temperature of city is more. And this is the Urban Heat Island Effect.

Basically, I defined Technically than the definition was,

The Urban Heat Island effect is defined as a effect in which the temperature of urban city is high as compare to outer or rural areas due to concentration of high heat absorbing material or infrastructure such as building, roads, etc.

UHI Effect happen Due to infrastructure development such as construction of highrise buildings, roads. factories, etc., Due transportation, due to use of air-conditioning mechanical & electrical devices, due to energy generation from non-renewable source, etc.

Heat island effects increases the temperature of city which directly affects on the health of people, on their work routine, on comfort of peoples, on energy consumption, on animals, on others organic bodies. Its looks like a cycle that each and every affected by such effect means whole environment cycle affected by such types of effect.

Scientist first noticed this issue as early as the 1800. Also in some study they show that the temperature of urban area as compare to outer or rural area is 1 to 7 degree higher during daytime while in night time the temperature is 2 to 5 degree Fahrenheit higher.

And ultimately this happen due to non-sustainable urban planning and development. Let’s Understand what are the causes of urban heat island effect.

Urbanization is one of the most important part of developed country but it should be done in sustainable manner.

If you observe than you see every where concrete product that is a mixture of cement, aggregate, sand, water and other admixture.

Concrete is a impervious material which create impermeable structure. RCC Roads are the perfect example of impermeable structure which ultimately leads to increase the size of runoff during rain and reduce infiltration of water bodies into the ground. In result you found the ground water problems that is a common problem now a days.

As per one report of hindustan times, Gurugram city looses ground water table 1m every year that means the water below ground going 1m below every year.

Ground water depletion is become a very big problem for every country. It affects the greenery of earth and ultimately affect the whole ecosystem.

If we come to the cement which is one element of concrete, is a one of the larger carbon emission product in the earth. Also Consume more energy as compare to other Materials. Such type of products lead to increase heat island effects.

High Rise building is one of the most important causes for heat island effect. Highrise structures traps the heat and create warming effects.

The heat absorption and reflection of highrise building is much more as compare to small or well planned structure which ultimately increase the efficiency of heating in the city.

The concentration of more highrise structure in less amount of area traps a sunlight heat as well as create high obstruction in flow of natural wind.

RCC and Bituminous paved roads create a impervious surface which leads the runoff problem. Also absorb and reflect more heat. Impervious surface reduce the landscape area that is affect the natural vegetation area in the city.

Natural Vegetation helps to keep the city cooler by absorbing less heat and evapotranspiration. But due to high concentration of concrete structures in less area reduces the greenery or vegetation. And also absorb and emitting more heat in a day as well as in nighttime and make a city such as a “Island of Heat”.

Transportation Factors includes the polluting activity of vehicles. The daily emission of heat & other gases from vehicles create more warming effect in the city.

These gases and heats are traps between concrete surface of high-rise building & roads and increase temperature of city as compare to other area.

Factorization is also one of the most important causes of urban heat island effect. Factories produces green gas which is more responsible for global warming.

The green gases accumulate into the atmosphere and create bubble like zone which cover the whole city. Such zones allows the very few movement of air & sun heats. That means the inner hot air & other gases traps and and result high warming effect into the influenced area.

4. Use of Air-conditioning devices

Air conditioning Devices is also one example of green gases emitting product which is also participate in heat island effect such as factories participate to help to increase warming effect that is already explain in above paragraph.

Population is also one of the major causes of urban heat island effect. If I say then the roots of all problems is excessive population.

Excessive population within less area increase the saturation ration of human into the city which leads to increase the other needs of peoples such as homes, roads, vehicles, factories, etc. for their desire purposes. And these all needs of human, helps to increase the warming effect.

People consumes oxygen and emits carbon dioxide which is one of the most critical green gas, and green gas traps heat.

The major impacts of urban heat island effects is listed below.

Such Energy demand for air conditioning is fulfilled by electricity in building and by petrol or diesel in vehicles.

A study say that the electricity demand for air conditioning increased approximately 1.9% for each 2 degree Fahrenheit increase in temperature. And ultimately this increase demand contribute to higher electricity expenses.

UHI Effects on human such as listed below.

Most of the species of the earth needed limited temperature to survive and save their ecosystem. And if there is a high temperature due to UHI Effects, affect the organism reproduction, metabolism and breeding activities.

Urban Heat Island Effect also affect the aquatic system. Due to it, temperature of storm water and ponds, rivers, lakes, ocean, etc. rises which result in thermal pollution. Due to that the metabolism and reproduction rate of water spices affected which ultimately affect the whole aquatic ecosystem.

There are several way to reduce urban heat island effect even a small steps can also helps to overcome UHI Effect.

Green roof is nothing but a layer of vegetation grown over a open terrace. Green roof is also called as terrace garden or rooftop garden.

What is Green Roof?

There are lots of advantages of green roof that is listed below.

As per one study, Green Roofs can reduce building energy use by 0.7% compared to conventional roofs, reducing peak electricity demand and leading to an annual savings of $0.23 per square foot of the roof’s surface.

A white roof or light colored roof is also one way to control the heat island effect into the city. Such type of roof reflect most of the sunlight and heat away from the building.

Such roofs absorb less heat and stay up to 50–60 degree Fahrenheit cooler than conventional materials during peak summer weather.

Cool Pavements are also consist the same characteristic such as white roof as described in above paragraphs.

Cool Pavement reflects most of the sunlight’s and absorb very less amount of heats which helps to control urban heat island effect.

The advantages of cool pavements are listed below.

Planting Trees and Vegetation is most efficient way to control urban heat island effect into the the city. Trees lower the atmosphere temperature by providing shade and evapotranspiration.

Green parking and structures is also one way to control urban heat island effect. This way includes the sustainable planning of structure and plantation of trees and vegetation at open space of building and landscape area surrounding the building.