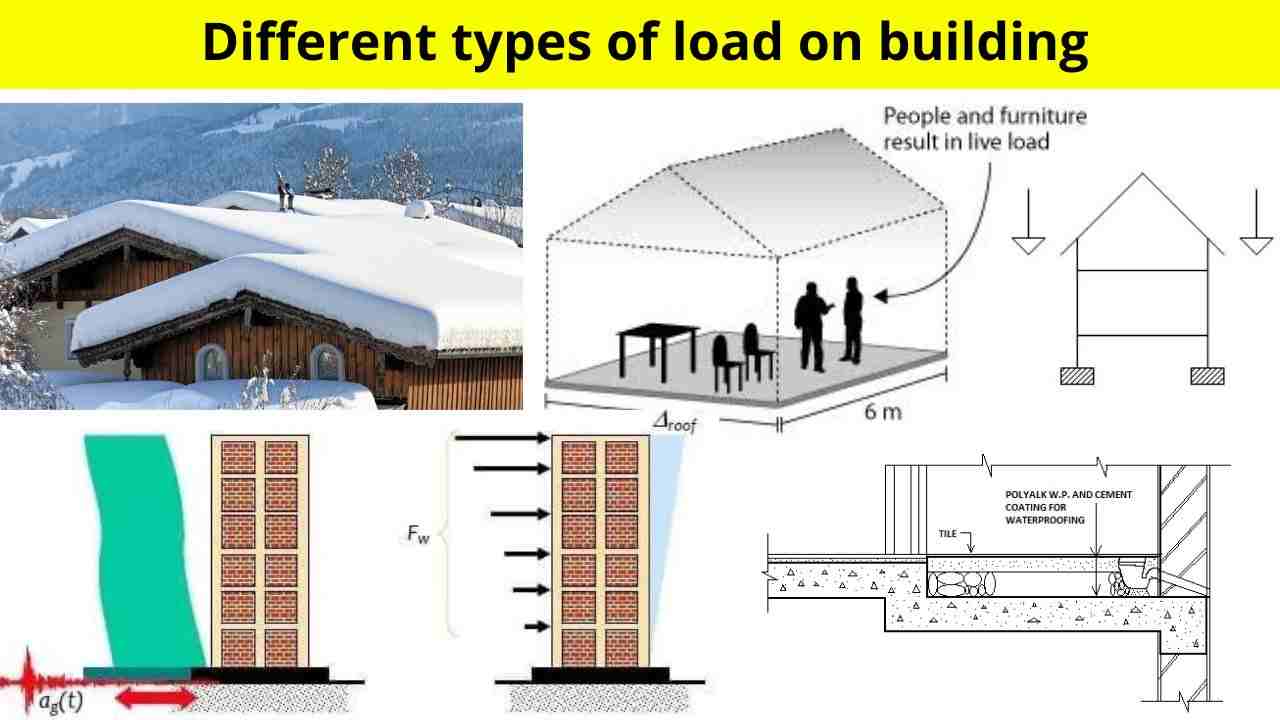 In this article, we explained the different types of load on Building, calculation procedure, parameters and much more.

So please read the article till the end, and of you like article please share with your friends.

Different types of load on Building

In structural design of any building, the defining of load is very important as per building architectural & other parameters.

The small amount of load will make a huge change in bending moment or shear force of building that will ultimately increase the section of elements & steel Quantity.

The consideration of each & every type of loading on structural elements is more important to see the perfect result, otherwise the round figure value will give round figure analysis & design of building.

So today, here I discuss the various types of loading that will comes on structural elements of building.

Majorly Five Loads exits in Structural design which are listed below.

Simply Dead load is a self weight of that elements which is depends on its own parameters such as size, density, material, etc.

Dead is one of the major load of any structure. Almost dead load cover a 50 to 60% of total load.

That means the any structural design is mostly affected by its own weight, especially is RCC Structure design.

While in case of steel structure the dead load is slightly lesser or larger than other load.

Above mention all are the major dead load that is applied while analysis of building.

The load calculation of any material include the basic concept that is is density multiplied by area. This is a basic concept which is used in all type of structural load formulas.

Slab load is a major dead load on a building that is totally dependent on its thickness. the slab load calculation is given below,

Parapet load is one type of wall load which is lies in a category of dead load this is dependent on the parameters of wall such a density, thickness, height, etc.

From this Formula load will come in KN/M

The water tank load is dependent on the material of tank and water capacity. Generally it is acting on the roof slab area on which it is rested.

The available load from this Formula is in KN.

To calculate floor water tank load for application in staad pro, the given load is divided by floor area on which it is rested.

The sunken slab is a lower projection of floor at location of toilet, bathroom, etc.

The space between floors slab to sunk slab is filled by brickbats, sands or other building waste material to make a perfect floor level.

This filled material load on sunk slab including self weight is known as sunken load.

Sunken load calculation describe as below,

The above formula give load in KN/m2 which is in floor load.

Also Read: What is Monolithic construction

Now a days building is design as a framed structure. The wall is just used to fill the gap between frame of column & beam. It is not used as structural element.

Due to not a type of structural elements, nowadays different types of partition walls are used in a building as per user requirements.

Partition wall load calculation is given below,

You will get the answer in KN/m.

Staircase is the one of the most common area for escape purpose that means staircase resist the high live load as compared to the other Structural elements.

Above formula give load in kN per meter.

Now a days, Architectural elevation of building is more important than its Structural behaviour.

In building, there are many loads except wall load. The architect provide various projection and other facilities in building for the good elevation purpose.

This all associated facilities and projection increased the dead load of building.

Generally, in structural design floor finish load should be taken as 1.5kN/m2.

Generally, in Structural design it is taken as 1 to 2.5Kn/m2 on slab area.

Live load is the second major load on building. From its name we can easily understand that the live load is a load of live things, such as humans loads, animals load and etc.

Live load should be taken from IS : 875 part 2 in which live load is changed as per type of building and its uses.

Tall buildings is mostly affected by wind load. Wind load is a type of horizontal load that is acting on a various faces of building. Wind load is depends on a wind intensity which is keep changing as per location.

IS:875 part 3 is provide the various codal provision of wind load.

Snow load is also become a more important in some cool places such as jammu & kashmir, himalay, uttrakhand and other locations.

Is 875 part 4 includes the all calculation provision of snow load on building.

A horizontal load is acting on a building during time of earthquake. Earthquake load is like a sudden Impact load on building due to movement or vibration of surrounding earth.

Earthquakes load become most dangerous for building due to its sudden Impact with high Intensity at leas time. But nowadays, building is designed to resist earthquake load. Building is designed accordingly IS 1893-2016 which includes the all details of seismic calculation and consideration on building.

1 thought on “Different types of load on Building | How to Calculate?”