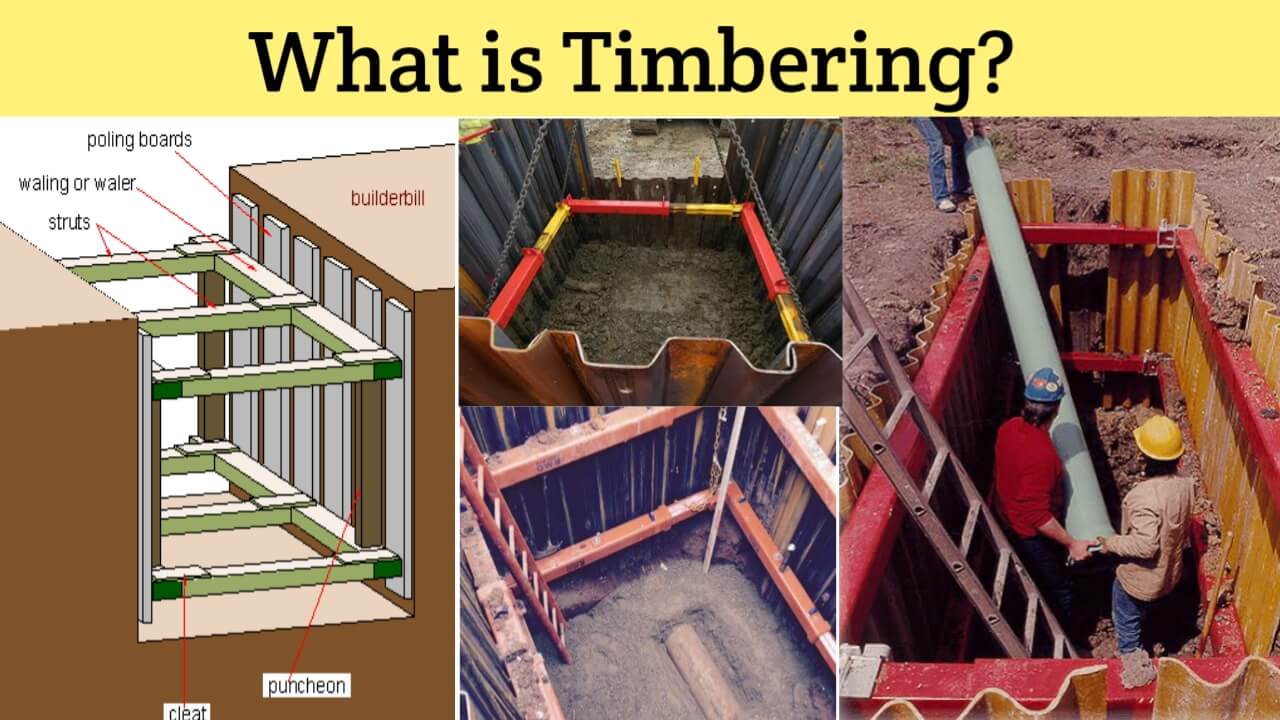 Necessity or Importance of Timbering:

Here we explain why timbering of foundation trenches is necessary? What are the importance of timbering? And so more.

The requirement or importance of timbering is as follows:

A brief explanation of the technical terms associated with the study of timbering works is as under:

A flat wooden plank which is in direct contact with the soil of the trench and is arranged in an vertical position on the side is called a polling board or planking.

Sheeting is the process of holding a polling board or plank together or using a sheet instead of a plank.

A piece of wood used to support sheeting/walling with two walls of a trench and to maintain a certain distance between the Wales and the main line of the trench is called a Strut.

The diagonal straightening used between the wells to reinforce the timbering framework is called bracing.

Trench walls are prone to collapse in very soft or hard soil. A special type of shoe made of iron should be placed at the bottom of the polling board used in such circumstances and 30 to 40 cm cm above the bottom surface during excavation, the planks are lowered to a greater depth with the help of shoe.  These types of polling boards or sheets are called runners.

There are five main methods for timbering:

This type of timbering is used when digging in very loose soil. Runners are long and thick wooden planks. Runners have a iron shoe attached to the bottom edge.

Runners are hammered into the ground to a depth of 30cm from the bottom of the trench. Runners are supported by Wales and struts.

Sheet piling is used in the following situations:

There are two types of sheet piles:

Precautions to be taken during timbering:

Soil erosion during deep excavation suppresses labour. Therefore special inspection should be done on the outside of the trench during such excavation. If cracks appear in the ground, the excavation should be stopped and the labours should be immediately instructed to move to a safe place.

The struts should be kept in a fixed position and its rigidity should be checked periodically.

As the soil pressure on both sides of the trench increases, the Wales bend.  Such Wales should be inspected from time to time and, if necessary, bent Wales should be prevented by giving more support or by placing strong planks.

Various timbering members like Sheeting, Wales, Struts, Bracing etc. move to their original position due to soil pressure and timbering is weakened.

Timbering work should therefore be inspected frequently and any defects found should be repaired immediately.  Such observation is especially necessary during the rainy season.

Timber boards, supports, Wales, etc. Should be removed safely in stages after completion of work.

The soil filling in the trench should be done by leaving enough water in layers of 20 cm to 30 cm thickness so that the soil layer does not settle.

If stones, pieces of wood or other materials are likely to fall during excavation in the trench, safety helmets should be provided for the workers to wear on their heads.

The movement of trucks, wagons, other machinery from the edge of the trench should be done under the guidance of an experienced supervisor.

Workers should be provided with proper tools.  So that they can use such equipment during emergencies and come out of the trench safely.

Supervisors should be appointed to supervise the labourers working in the trenches.  The labours alone should not be allowed to go into the trench.

If the foundations of the surrounding building become unsafe due to excavation, such building is to be protected by temporary support.

A suitable resting place should be arranged near the trench so that the labours can take their food and rest.  Workers should be forbidden to rest in the trenches.

13. Fencing and lights around the trench:

Wire fencing should be made around the trench to prevent pedestrians, vehicles or animals from falling into the trench. Red lights should be kept at the edge of the trench at night to prevent accidents.

14. Design and Arrangements of Timbering members:

The size of the member should be determined on the basis of calculating the load on the various members used in timbering such as planks, struts, etc.  The spacing and size of such members are determined to keep in view the type of soil and depth of the trench.