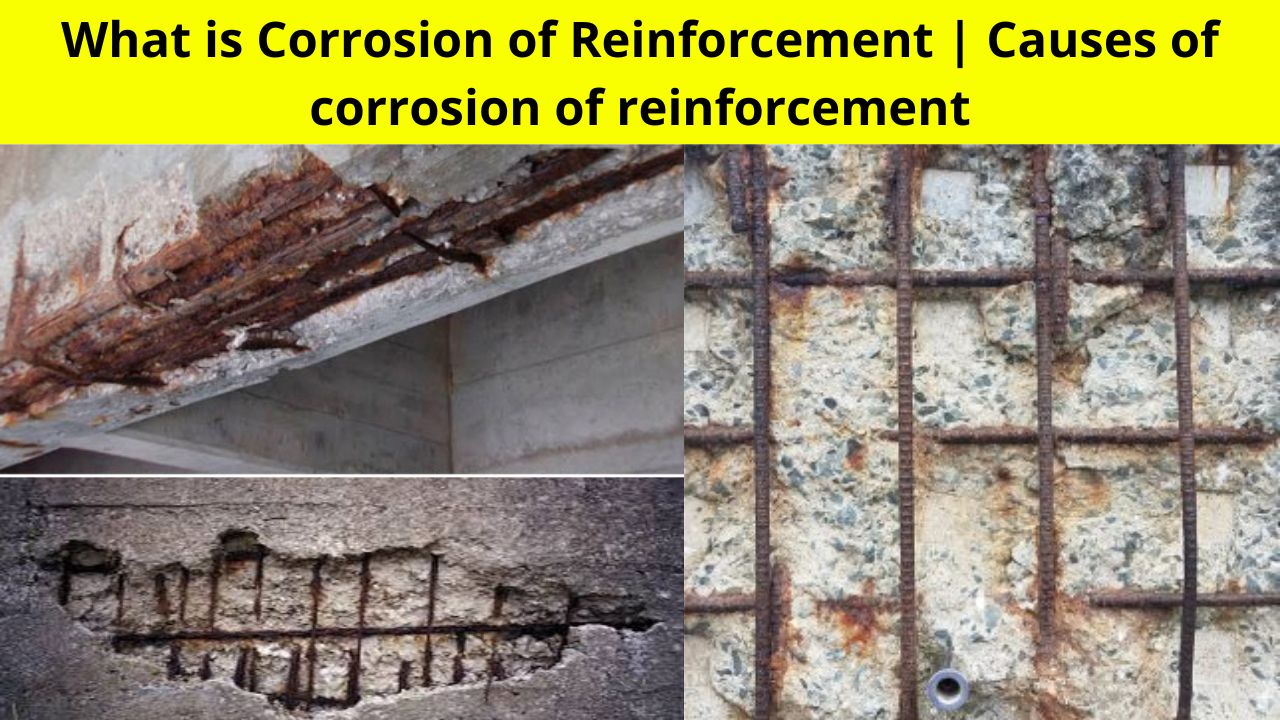 What is Corrosion of Reinforcement

Corrosion of reinforcement is a very complex process. It includes chemical, electrochemical and physical processes.

When reinforcement steel is corroded, iron oxides are produced that are 2 to 4 times the size of the corroded steel. Hence, in concrete, high stresses are generated around the steel bars which leads the cracks in concrete and at end concrete breaks.

For the corrosion of reinforcement, an electrochemical cell must first be formed. This cell has two electrodes – anode and cathode. Both these electrodes are separated by an electrolyte and connected in an electric circuit.

The Anode and Cathode have a potential difference. Hence, the steel is further oxidized in the presence of water and oxygen near the anode to form iron oxide.

These processes can be illustrated as follows.

Also Read: Methods to Repair leakage of toilet and Bathrooms

Causes of Corrosion and Preventive Measures

For More Details See: Causes of Cracks and Remedial Measures

Presence of moisture is necessary to start a corrosion in reinforcement. Because, Moisture is act as a electrolyte in electrochemical cell.

Permeability of concrete is also one of the main reason for corrosion of reinforcement in concrete. Permeable concrete allows entry of water and oxygen into the concrete which leads the corrosion

Carbon dioxide (CO2) of atmosphere enters into the concrete and combines with calcium hydroxide to form calcium carbonate, which is soluble in water. This process is called carbonation.

Carbonation reduces the alkalinity of concrete and reduces its resistance to corrosion. Minimum 20 mm cover is required in RCC to prevent corrosion of reinforcement due to carbonation.

Cement paste of concrete, create a layer of gamma iron oxide around the reinforcement bar which prevent steel against the corrosion. But, Chlorides ion break the layer which leads the corrosion of reinforcement into the concrete.

Soluble sulphates like sodium, potassium, magnesium, calcium, etc. present in water, soil or bricks. These sulphates combine with Tricalcium aluminate (C3A) and lime of cement to form a ettringite which is very large in size. So the concrete cracks and the steel bars gets rusted.

To Prevent the effect of sulphate attack,

To prevent the effect of alkali aggregate reaction

If the concrete cover is inadequate, sea water, moisture, carbonation will cause steel to corrode.

The following are recommended covers in concrete as per IS 456–2000.

Apart from this following measures are also taken to prevent corrosion of steel.