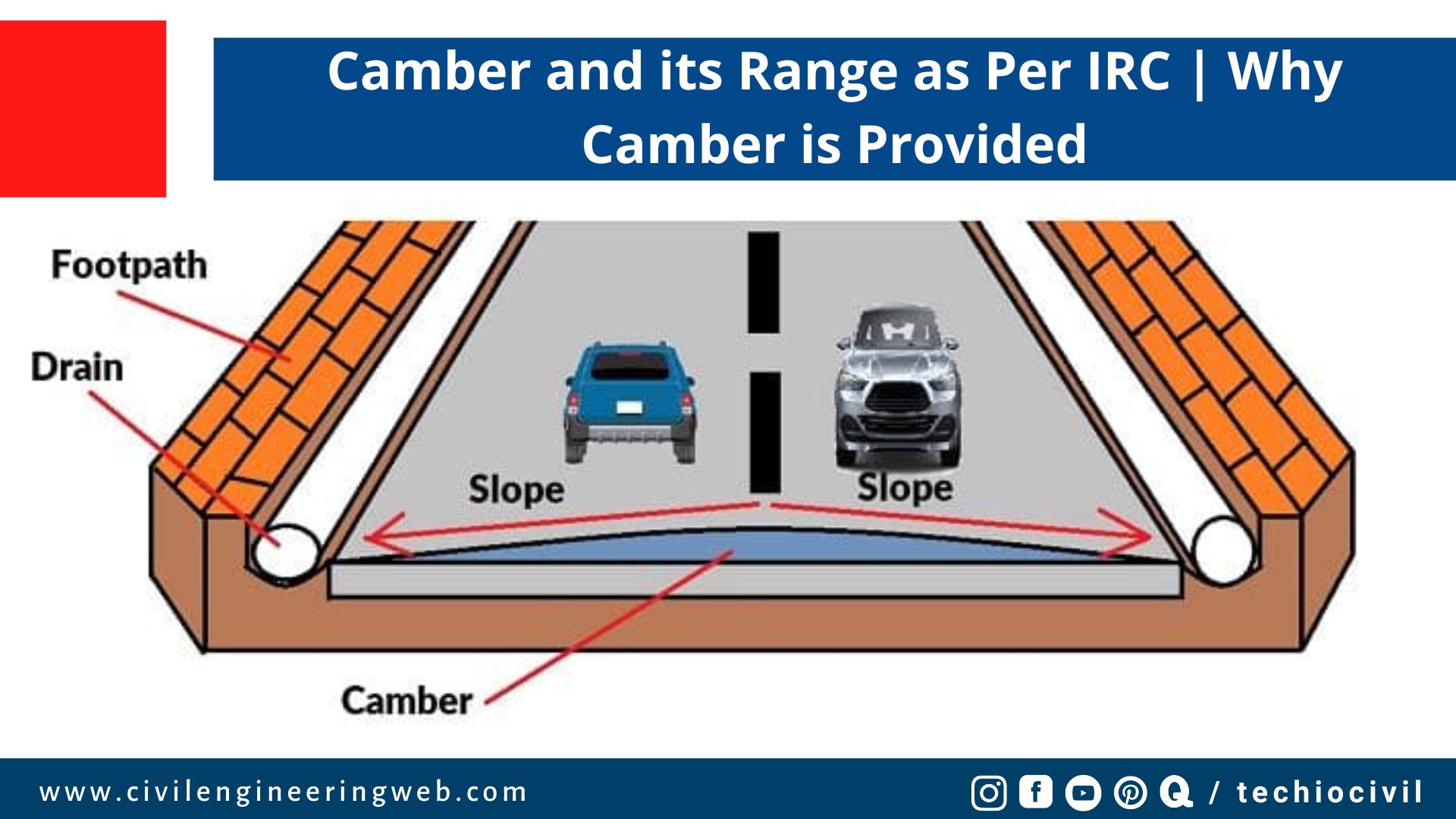 In this article, we explained the what is camber in road, why camber is provided in roads, its importance, types of camber and its requirement in various types of pavement. Also shown the recommended values of camber of road as per IRC, camber formula, etc.

So, Please read the article till the end, and if you like it please share with your friends and give us a energetic review in comment section.

What is Camber in Road

Camber is a slope provided on the road surface in the transverse direction to drain out the rain water from surface to avoid skid of vehicles and pavement damages.

Camber is again one of the most important element of a road pavement which have lot’s of advantages for longer durability of road surface.

Generally, A camber is a crown shape element on the surface which is created by a elevating the center of carriageway with respect to its edges.

The rate of camber or cross slope of road is usually designated by 1 in ‘n’ which means that the transverse slope is in ratio 1 vertical to n horizontal or it can be expressed in term of percentage. For example 2.5% camber means the camber of road is 1 in 40.

Do You Know: What is Autoclaved Aerated Concrete

Importance of Camber on Road

The camber is very important for following points.

To prevent the entry of water into the road pavement layers and subgrade base; If surface water enters into a subgrade through pavement causes a heavy damage on road. Because water soaked by soil and it may be get settled, which leads the heavy damages on the road surface.

3. To Avoid Skid of Vehicles

Do You Know: What is Monolithic Construction Technology

The requirement of camber is depend on the type of pavement and rainfall amount.

Again, The steeper means not too steep, Too Steep cross slope of roads causes the uncomfortable side thrust and drag on steering wheels, problems during vehicle overtaking, formation of cross ruts, etc.

Recommended Values of Camber in Road

The value of camber recommended by IRC is mentioned in below table .

The camber of road is subjected to minimum 3.0% and maximum 5.0% for earth shoulder.

Do You Know: What is Tunnel Formwork System

Shape of Camber in Road

The shape of camber is adopted as per types of pavement and rainfall intensity. For Cement Concrete Pavement, Straight line camber is usually adopted due to easier in construction.

How to find a Height of camber in road example

i) For example, A 6m wide two lane highway with cement concrete surface. What should be the height of the camber with respect to the edges?

As per recommended value of camber by IRC, for cement concrete pavement in heavy rainfall region, a 2.0% camber is adopted.

For Bituminous and WBM Pavement, Mostly a parabolic camber was used on road surface.

As per recommended value of camber by IRC, for Water Bond Macadam Pavement in heavy rainfall region, a 3.0% camber is adopted.

Therefore, the height of camber is find by given below formula at X meter distance in parabolic shape.