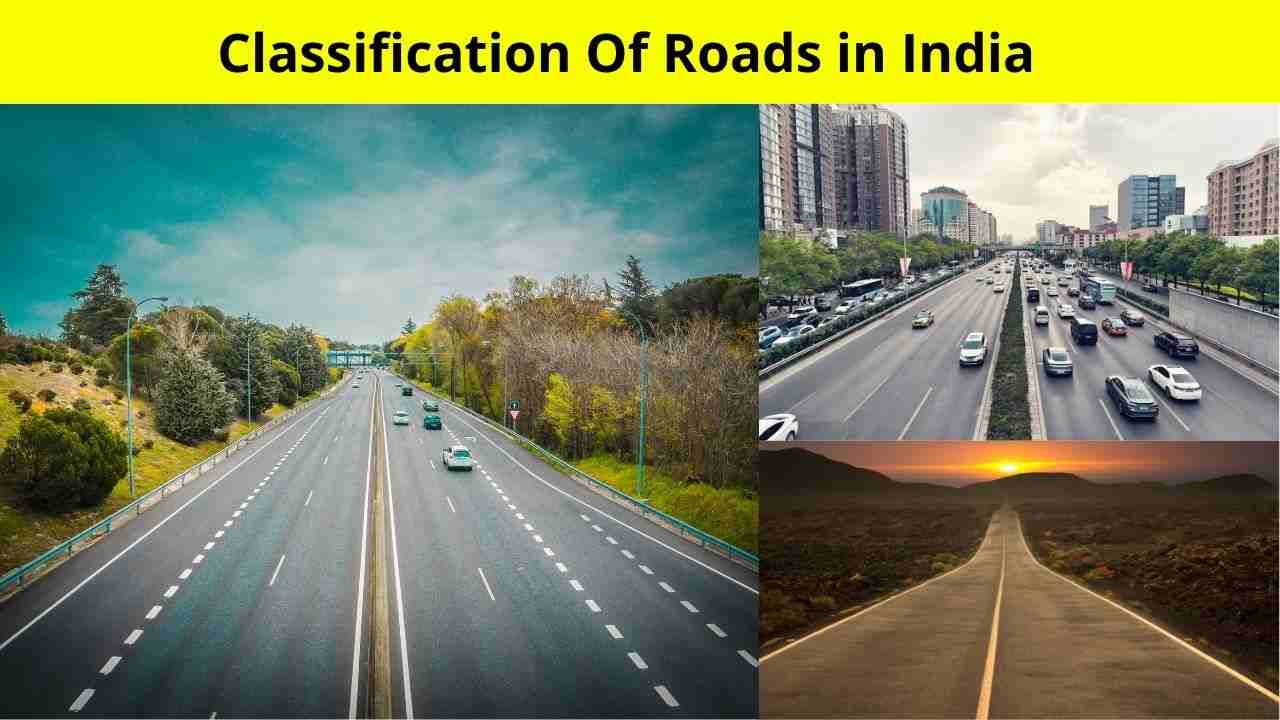 In this article, we explain the classification of roads in India, based on pavement, carriageway, location, function, traffic, 20 year third road development plan, urban roads, etc.

The different types of roads in india are classified as below.

Classification of Roads based on Weather Condition

The classification of roads based on weather condition are mentioned below.

All Weather Roads is defined as the road which is useful in ever seasons of the year except at major river crossing where some interruption to traffic will be happen during heavy monsoons upto certain period of time.

Means, the flow of traffic on all weather roads continue every seasons without any problem.

Fair Weather Roads is defined as the road which is interrupted during monsoon seasons. Means, during the monsoon, the river or its branches will be overflow across the road. A causeway is a perfect example of fair weather roads.

Classification of Roads based on Carriageway

Road are classified based on carriageway or pavement are listed below.

Un-Paved roads is defined as the type of road which pavement is uneven, not hard and not smooth surface. The earth roads and gravel roads are the perfect example of Unpaved Roads.

Paved Roads is defined as the type of road which consist the hard pavement, Uniform and smooth surface. The Concrete roads are the perfect example of Paved Roads.

Classification of roads based on Traffic Volume

Based on Volume of Traffic, the roads are classified as Heavy, Medium, and low volume roads. This classification of roads is directly relevant to volume of Traffics.

Classification of Roads based on Nagpur Road Plan

The Nagpur Road Plan classified the Indian roads based on location and function are listed below.

National Highway allow traffic to flow at higher speed as comparison to state highway. Also provide un-interrupted road communication throughout the country. The national highway in India are expressed in the form of number such as NH-4.

The flow of traffic volume in state highway is very similar to national highway. Also the geometric design specification and design speed is same compare to National Highway and State Highway.

Major District Roads are the road which connecting the state highway, market places, residential areas, gardens and other important places within cities.

The Major District Road have lower design speed and geometric design specification as compare to national highway and state highway.

Classification of Roads as per Third 20-Year Road Development Plan

Primary System is the Networks of main roads which is connecting the large states, business hubs, ports etc. The Priority of this system is high.

Expressway are the additional class of road which is added into the third 20 year road development plans.

The Priority of secondary system is high to moderate as per its purpose and function. Secondary System consist of two categories roads.

Also Read: What is GFRP Bars

The tertiary system are rural roads and these consist of two categories of roads.

The Urban area roads are classified as mention below.