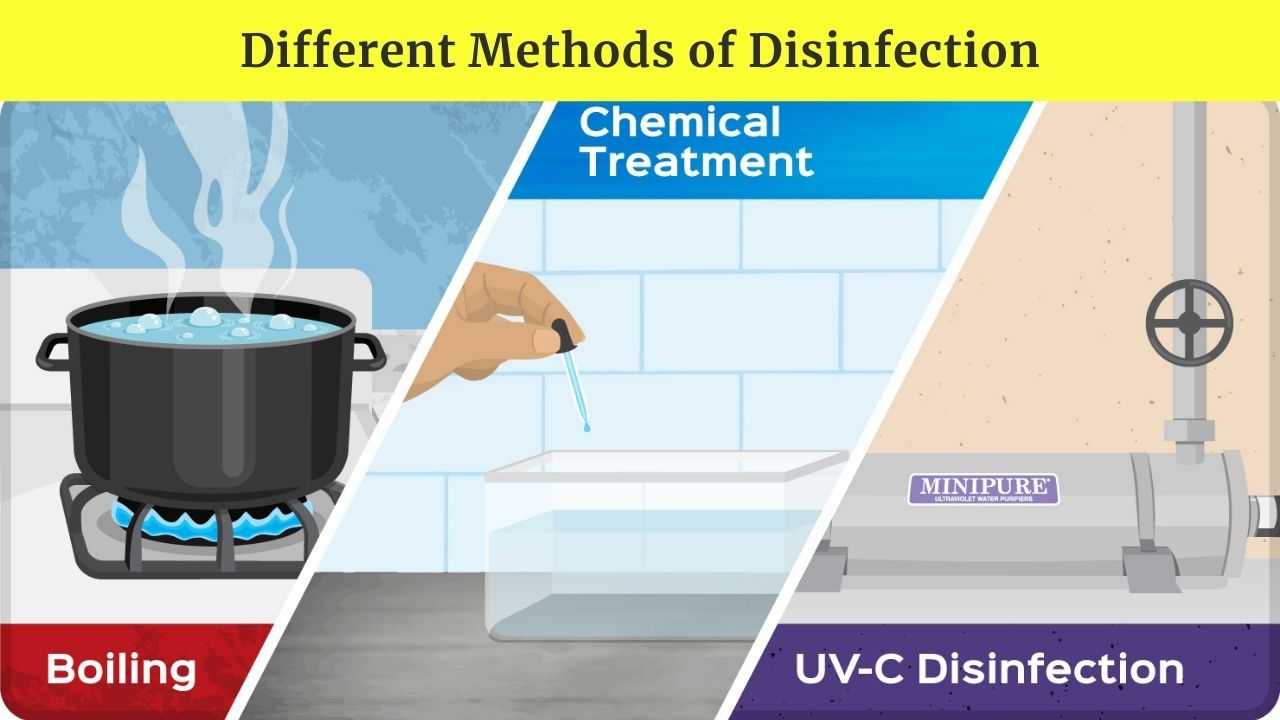 In this article, we explain what is disinfection of water, how water disinfects in water treatment plants, various methods of disinfection, advantages, and disadvantages of each method.

At the initial stage, various water treatment activities like water screening, sedimentation and filtration were done to purify the water. The process usually involves physical purification of water, but disinfection procedures are performed on the water to remove bacterial as well as other germs contaminants.

Due to the initial water treatment processes performed on the water during the various stages, about 99% of the germs are killed or eliminated, but only a very small amount of the germs, bacteria, and other impurities remain. Such biological (bacterial) contaminants should be very harmful to health.

To remove such types of germs, viruses, and bacteria, disinfectant chemicals are added into the water to kill such biological (bacterial) contaminants. This chemical process of water treatment is known as Disinfection of water.

The simplest method of disinfection is the boiling process by which the germs of typhoid, cholera, and other diseases are killed. But it is difficult and expensive on a large scale.

Other methods include purification of water by chlorination, zonation, and ultraviolet treatment.

Methods of Disinfection of water

Methods of disinfection are classified into the following three methods:

The essential properties of disinfectant chemicals should be as under to use for disinfection Process:

Chlorination is a generally accepted and widely used method of disinfection. This method uses chlorine or its various compounds of chlorine to kill germs, bacteria, and other impurities.

The following forms of chlorine are used to perform water treatment chlorination processes:

The following formula is useful for calculating the amount of chlorine:

Required quantity of chlorine in kilogram

Various forms of the chlorination process

The chlorination process is classified into the following types depending on the stage of use of chlorine for processing disinfection of water and the expected results of chlorination.

Sometimes in case of emergency use of water and also such water is of good quality only treatment other than chlorination should not be done. This type of chlorination is called “plain chlorination”.

For plain chlorination, usually, 0.5 ppm of chlorine is added. In addition to disinfection, simple chlorination removes organic impurities from the water as well as color.

Chlorine is often added around 0.1 to 0.5 ppm before the water filtration process to reduce the germination on the filter. This type of chlorination is called “pre-chlorination”.

Due to pre-chlorination, oxidation of excess substances in water removes taste and odor. In addition, the cleaning period of the filter can be extended.

The practice of giving extra doses in such a way that about 0.10 to 0.20 ppm of free chlorine is available after completion of all water treatment procedures is called “post-chlorination”.

In this method, the chemical action takes place in four stages as shown in the figure by gradually adding chlorine to the water.  This process is called “free-residual chlorination” or “breakpoint chlorination”.

The chlorination in this method can be described as follows:

In the first stage, disinfection takes place and the amount of residues of chlorine is less.

In the second stage, the amount of combined residual chlorine starts to increase. Maximum disinfection is done during this stage.

The third stage involves the splitting of chloramines and chloro-organic compounds. Oxidation of organic matter in the water is continued by adding chlorine after which the water becomes odorless and tastes bad.

In the fourth and fourth stages, bad odors and tastes in water are removed and oxidation of organic matter is eliminated. Free chlorine is obtained at point D as shown in the figure which is known as ‘break point’.

Experimentally, chlorination can be done to prevent water contamination until free chlorine of about 0.1 to 0.2 ppm is found after the breakpoint.

Chlorine levels in water need to be increased to control the situation when an infectious disease outbreak occurs and the amount of organic impurities in the water increases. In such cases, excess chlorine is added after breakpoint chlorination. This action is known as the super-chlorination process.

Adding extra chlorine to water in this way can be done during any one or more phases. Extreme chlorination of 0.5 to 2 ppm is usually done in the post-break point phase or this can be added even after filtration action.

Super chlorination causes the water to have an excessive odor of chlorine and also retains the taste, so the excess chlorine in the water is de-chlorinated and removed before it reaches the public.

Due to Super chlorination or any other reason, the taste of water changes when the amount of chlorine in the water is too high. It also has bad odor. Such water is de-chlorinated.

During this de-chlorination, a small amount of chlorine residue is retained which is carried forward in the water supply system and also helps in disinfection in the further system.

Aeration method for de-chlorination of excess chlorine in water, exposure to sun or use of chemical compounds is adopted.

The following compounds are commonly used for de-chlorination.

Ozone is an excellent disinfectant. The effectiveness of ozone in disinfecting water is due to its oxidizing power. Ozone is a temporary isotope of oxygen. In which there are three atoms of oxygen. It is denoted by the ‘O3‘. When ozone is converted into stable particles i.e. its oxygen becomes O2 then it produces undeveloped oxygen (Nascent Oxygen, O).

Undeveloped oxygen reduces the organic matter present in the water, without producing an offensive taste or odor. A dose of 2 to 3 mg/lit of ozone gives 0.1 mg/lit residue after 10 minutes. Ozonization is a natural way of disinfection.

Ultraviolet rays are invisible rays of light with a wavelength of 1000 to 3000m. The sun’s rays also contain ultraviolet rays which can be used for disinfection.

U-V rays are produced by passing an electric current through a mercury vapor placed in a quartz bulb in a laboratory. The water that is to be disinfected is passed over this bulb.

This method is effective for clean water. U-V rays can effectively penetrate only up to 30 cm depth of water. That is why it is used in small installations e.g.  Used only for swimming pools.

It is also used for disinfection of water used for surgical purposes in hospitals.