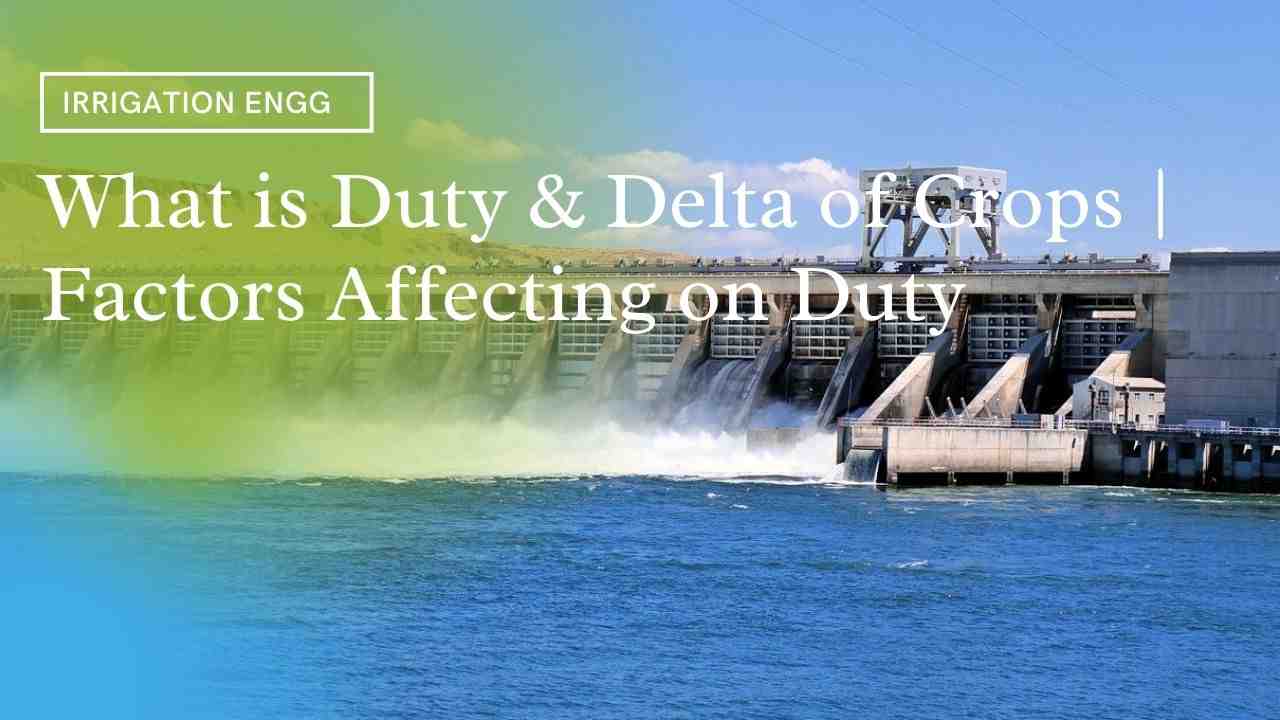 In this article, we explained what is duty and delta in irrigation, the relation between duty and delta, factors affecting the duty of crops, values of delta for various crops. And so more.

Please read the article till the end.

What is Duty and Delta in Irrigation?

Before understanding the duty and delta of crops, we understand what is crop period and base period in irrigation.

The time period between instant sowing of crops to instant harvesting of crops is known as crop period.

The base period is defined as a time period between the first watering of crops at the time of its sowing to the last watering before its harvesting. It is also known as the base of the crop.

What is Delta in Irrigation?

Each crops required such amount of water during its period of growth in some fixed interval of time.

Generally, 5 to 6 cm of water required by crops in every interval of time during their base period, But it is also dependent on climatic conditions, type of crops, and soil.

The time interval between two such consecutive watering is called the frequency of irrigation or rotation period.

The summation of the total water depth supplied in the various intervals of time during its base period for the full growth of crops is known as a delta of crops.

Delta is defined as the total amount of water depth is required by the various crops for the full growth (maturity) during the base period.

Definition of delta of crops

Example of delta in irrigation:

If rice requires about 10cm depth of water at an average interval of about 10 days, and the rice is 120days, find out the delta for rice.

Hence delta for rice is 120cm.

What is Duty in irrigation?

Duty is defined as the number of hectares of land that should be irrigated for full growth of crops by supplying 1m3/sec of water continuously to the base period of that crop.

Definition of duty of crops

Lets understand duty of crops by one simple example.

If water flowing at rate of 100m3/sec, runs continuously to the base period, and matures 1500 hectare land of crops, then the duty of water for for that particular cop will be defined as 1500 hectares per cumec.

Relation between Duty and Delta of crops:

Let B = base period,

Let, One cumec of water supplied to the crop on the field to the base period.

So the volume of water is equal to

By the definition of duty, the D hectares of land mature by supplying 1m3/s water during the base period of crops.

This quantity of water (V) matures D hectares of land or 104 D square meter of area.

Total depth of water applied on this land

This total depth of water in known as delta

Find the delta for a crop when its duty is 864Hectares /cumec on the field, the base period of this crop is 120days.

The duty is dependent on the type of crops because the various types of crops require different amounts of water. a crop requiring more water has a less flourishing area as compared to that requiring fewer water crops for the same supply of water.