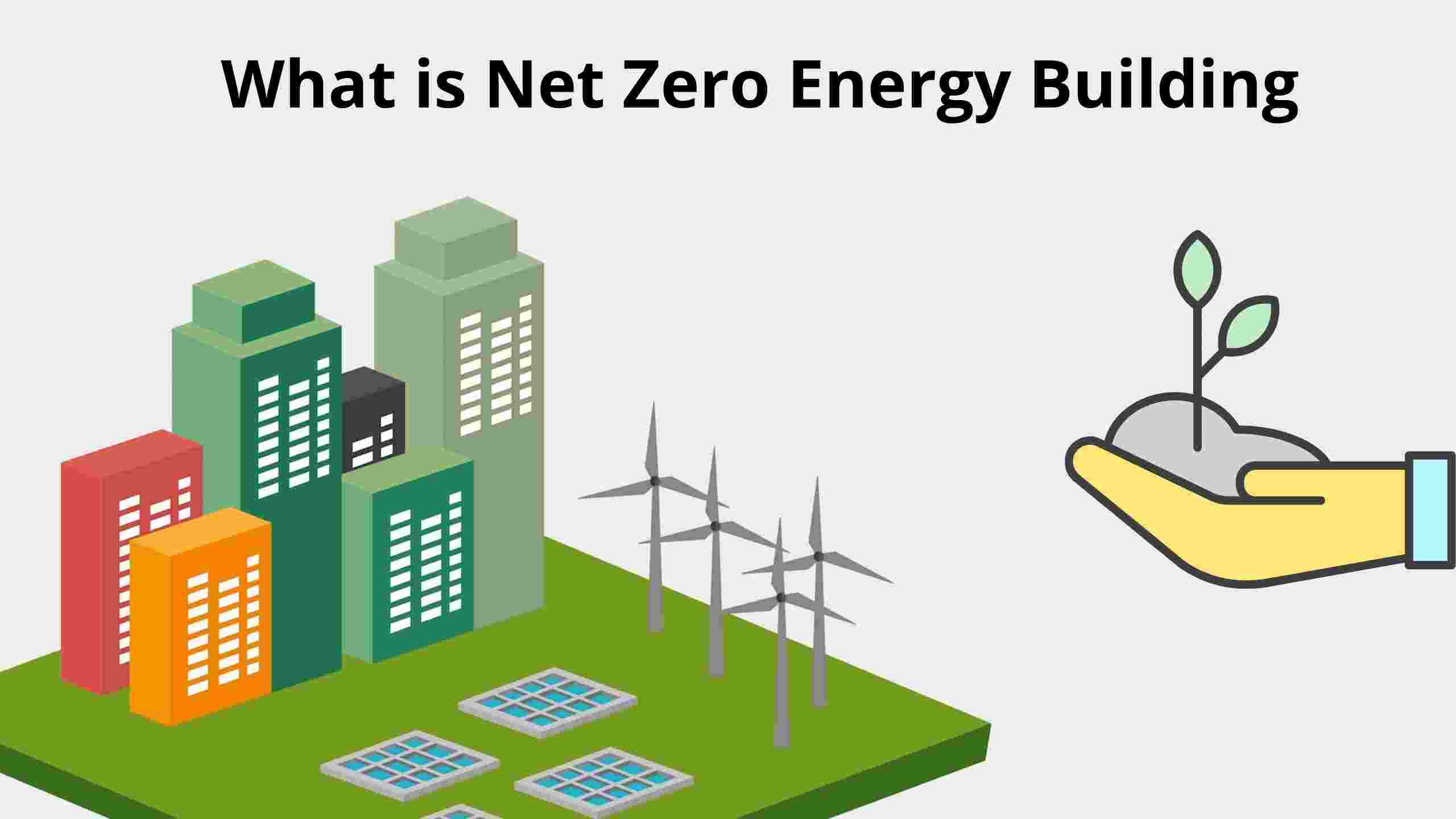 What is Net Zero Energy Building?

It suggests four ways in which net-zero energy may be defined:

Site Energy refers to the energy consumed and generated at a site (e.g. a building) is equal, Regardless of where or how that energy originated.

Source Energy refers to primary energy needed to extract and deliver energy to a site, including the energy that may the process of generation, transportation, and distribution.

A source NZEB produces (or purchases) at least as much as it uses in a year when accounted for at the source.

Buildings that still use natural gas for some heating or for some cooking opt for this definition as a way to deliver a building efficiently and reduce energy costs.

Most zero net energy buildings get half or more of their energy from the grid and return the same amount over the course of a year.

Buildings that produce a surplus of energy over the year may be called “energy-plus buildings” and buildings that consume slightly more energy than they produce are called “near-zero energy buildings” or “ultra-low energy houses.

The first Zero-energy building was in north Texas. It’s possible to make it everywhere in the world since already been built in countries close to Arctic Circle like New Zealand. This type of house in Dallas USA is selling at approximately 1 million USD.

High-efficiency solar panels are proposed. It cools air from toilet exhaust using a heat recovery wheel in order to reduce the load on its chiller system. It has many water conservation features.

The world’s first standard passive house in Ireland, it was Scandinavian homes launched in 2005 constructed in Ireland.

In October 2007, the Malaysia energy center successfully launched and complete the PTM zero energy office building. The building has been designed to be a super-energy-efficient building using only 286 kWh/day.

In September 2006, the Dutch headquarters of the World Wildlife Fund (WWF) in Zeist was opened. This earth-friendly building gives back more energy than it uses. All materials in the building were tested against strict requirements laid down by the WWF and the architect.

In February 2009, the Research Council of Norway assigned The Faculty of Architecture and Fine Art at the Norwegian University of Science and Technology to host the Research Centre on Zero Emission Buildings (ZEB), which is one of eight new national Centres for Environment-friendly Energy Research (FME).

And so many zero energy buildings constructed in the world.

Zero energy homes and buildings decrease the need for fossil-fueled power plants. And due to this concept reducing greenhouse gases, therefore, protects the environment against these harmful full gases. They create a state powered by clean energy + highly-efficient buildings.

Zero energy buildings achieve one key green-building goal of completely or very significantly reducing energy use and greenhouse gas emissions for the life of the building.

Zero energy buildings may or may not be considered “green” in all areas, such as reducing waste, using recycled building materials, etc

The zero-energy building provides heat and electricity to the building by using solar cells or wind turbines for electricity, and biofuels or solar collectors linked to seasonal thermal stores for space heating.

We have enough energy from the sun, solar panels provide energy to meet all the electricity requirements and build using alternate building materials and energy sources.

You need to choose the right material for getting the required efficiency.

Zero energy house uses glue-laminated timber (which has a low carbon footprint) as the main structural element in place of concrete and steel, so reduces the overall weight of the structure and also less damage in case of any natural disasters.

Over the house you have a green roof with local plants, it’s used as part of insulation as well as a cooling system, water is stored on a roof in small tanks which are used to water the plants.

All the walls in the house are built with hollow blocks and filled with concrete. Block is a mix of concrete and wood which acts and anti-bacterial and has great insulation properties. Insulation is provided inside the blocks to prevent energy loss.

Hollow blocks are used to make walls that handle moisture and insulates at the same time, the blocks are filled with concrete (which is having 50 % fly ash replacement for the Portland cement) and smaller rebar’s.

On the roof, they put a fabric, give airspace between fabric material and the roof, blow a foam under the fabric which expands on itself and takes shape of a cave-like roof. Foam has got insulation properties so air below the roof becomes cooler during the summer season.

Alternatively, for the winter season, the roofing system which is metal panels dark color, it absorbs heat like any other dark color.

Above the foam on the roof is a vapor barrier and above that is the air space about 1.5 inches.

Air is made to pass in the roof, making the area warmer, and supple grilles installed on the roof to pass the hot air making the house warmer.

Floors are kept warm, such a system that hot or cold water can pass under the floors making it warm or cooled, generally warm as western countries temperatures are often very low and the warm water is coming via solar panels on the rooftop.

The water pipes pass down the concrete floor, these piping system gets heated via solar panels which produce warm concrete floor. In the house, a sun tunnel skylight is given at selected locations.

All the heat from the sun is directed via a system to the floor of the house which keeps it always warm.

A rainwater harvesting system is applied, the water from the rooftop via a downspout collects in the storage outside the house as per the storage capacity.

This collected water can be used for landscape as well as other domestic purposes except drinking, so saving the cost to buy the water from an outside source.

The Source of hot water is through solar integrated roof panels, but sometimes when the sun shines high, water becomes too hot, so a system is installed inside all sanitary fixtures which mix the cold water with the hot water thus making the temperature safe for use.

Similarly, when the sun shines too low, scarcity of hot water comes, so it has a backup of hot water which mixes with cold to make it safe for use.

The water heater is installed which is gas-operated which comes on & off automatically, so a lot of precaution is needed to operate the system.

Push buttons are installed in the kitchen, toilets, whenever you want hot water, push the button, a circulating system bring the hot water from the stored place to the toilets and kitchens which reduces to the predetermined temperature at the receiving end like a washbasin, shower, bathtub, and all over the home where is required.

In the front and back of the house all the windows open and closes in reverse direction providing natural ventilation, skylight is given on the roof for natural air and light

The cooling system is also used as the dehumidifying machine, in case we want to reduce the relative humidity of the house, the variable speed fan starts sending lesser air thru blowers further into the house which results in low humidity.

Solar Panels On the Roof

The solar panels on the rooftop convert the sunrays to electrical energy so the electric dept. is amazed to see that the electric meter starts running backward, in fact, you can ask tell your utility companies to pay you is something extraordinary.

There is an inverter installed inside which converts the direct current produced by solar panels to alternating current which is used in the USA.

Reduced consumption of electricity from the lighting system, all are fluorescent lights or low voltage lights which are generally advanced lighting package and very decorative lights it can give you a very aesthetic and antique look.

HVAC system air is cooled by a chiller system that either chills or heat water. The water is then sent thru copper tubes not under high pressure to the coils which gets cooled with chilled water and is connected to the blowers at various location in the house, thus the house gets chilled.

Sometimes 1.5 tons and 2 tons compressors are placed outside, both are factory charged with refrigerant. Attach to each compressor is chiller system.

So at a time when there is a single-family the 1.5 tons or 2 tons compressor is working automatically depending upon the weather and if there is the requirement of higher chilling like there is some function in the house then both compressor starts working simultaneously in random and chills the house.

This system is designed based on wind direction. A large overhang is provided on the front porch of the house so avoids direct sun to heat the entrance.