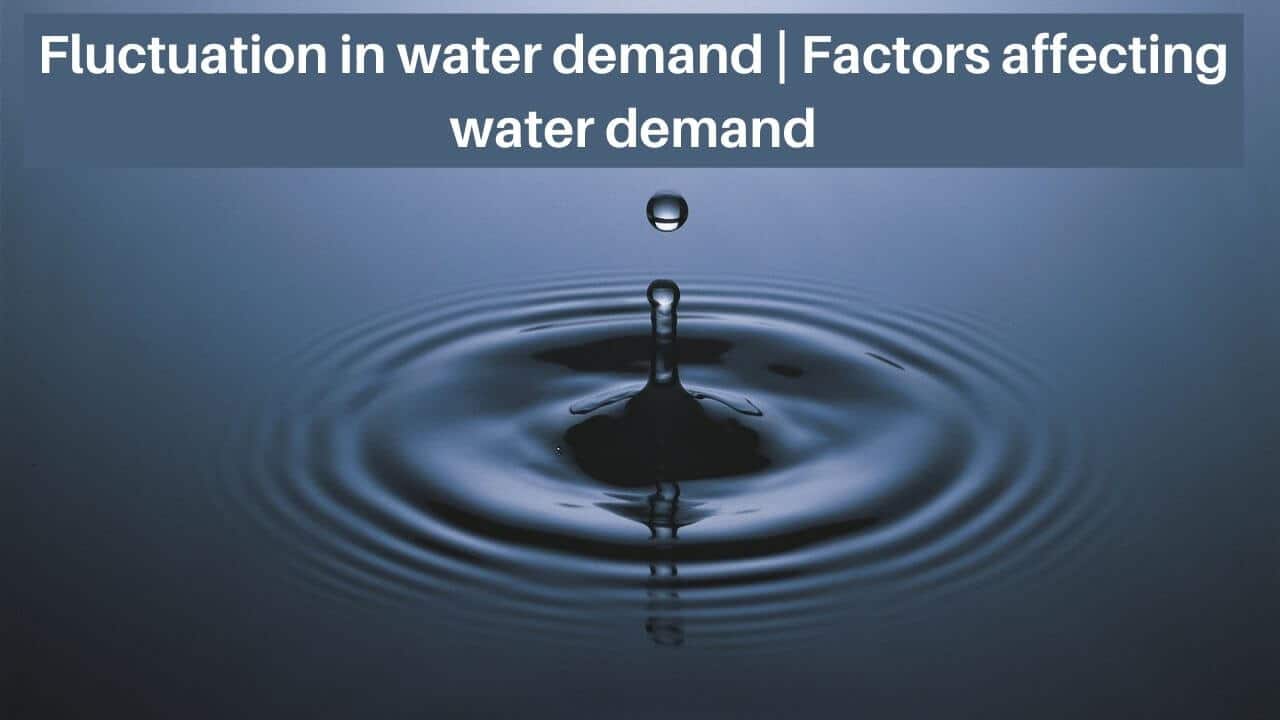 Water demand is calculated in different ways.  It usually calculates for the whole year based on the average daily consumption of water.  Experience has shown that water consumption rates are not the same throughout the year.  But according to time, day, mass, and seasons this water demand changes.

The fluctuations of water demand are classified according to time into three types as follows:

After the observation of water consumption for various purposes in a day, observed that from 7.30 am to about 10 am, maximum water is used for bathing, washing clothes as well as cooking, etc.

Then, Water Consumption is very low from 12 noon to 4 pm.  This is followed by a slight increase in water consumption again in the evening and is usually stopped from 11 pm to 4 am.

In this way the fluctuations in water demand throughout the day can be seen from the graph below.

Similarly, people use more water for bathing and washing clothes on Sundays or holidays than on other days.  In addition, fires, as well as whirlwind days, consume more water.

The rate of water consumption varies from season to season as well as from month to month.  The summer season uses much more water for bathing, drinking, washing clothes, and cleaning houses than other seasons.

In the same way water consumption is very low on very cold days.

Water Consumption rates vary from season to season. As the average daily consumption on normal days is 120 liters which goes up to about 160 to 180 liters in the summer season while in winter it drops drastically to 70 to 80 liters.

In this way, the atmosphere and temperature of each season have an effect on water consumption. Therefore water supply pipelines and mains are designed keeping in view the maximum consumption rate.

2. Habits and living standard of people:

But in the case of lower living standards, the per capita water demand going below which causes the decreases of water demand.

Water supply arrangement i.e. if the water is supplied at fixed times or at certain intervals during certain days instead of a continuous distribution of water for the whole day, then water consumption can be done properly and economically. Due to that water consumption by peoples can be controlled.

The type of sewerage system of any city or town has a great impact on water demand.  As the sanitation system develops the rate of water consumption for its devices increases.

5. Population of the city:

The rate of population directly affects the rate of water consumption.

6. Developmental pattern of the town:

Water consumption also depends on the Developmental pattern of the town city. In the dense city, the pattern system of the city is too complicated which makes the water distribution system complicated in the city. Due to that the water uses and losses increase in the city.

While, in case of simple pattern city, the water distribution system also becomes simple in the city, which decreases the water uses and losses in the city.

Finally, we came position to conclude that the is developmental pattern of the town also affects the water demand.

Water charge is determined by the water supply department in every city. Water losses by both the people and the distribution system are high in the city where the water charges are taken at a flat rate.

But if the meter system is adopted for this charge, the unnecessary expenditure of water by the peoples is greatly reduced and also control over leaking water.

If the water supplied to the people is of high quality then the interest of the people towards it increases and its consumption also increases.

If water quality is poor, people are reluctant to consume it and this reduces the overall consumption.