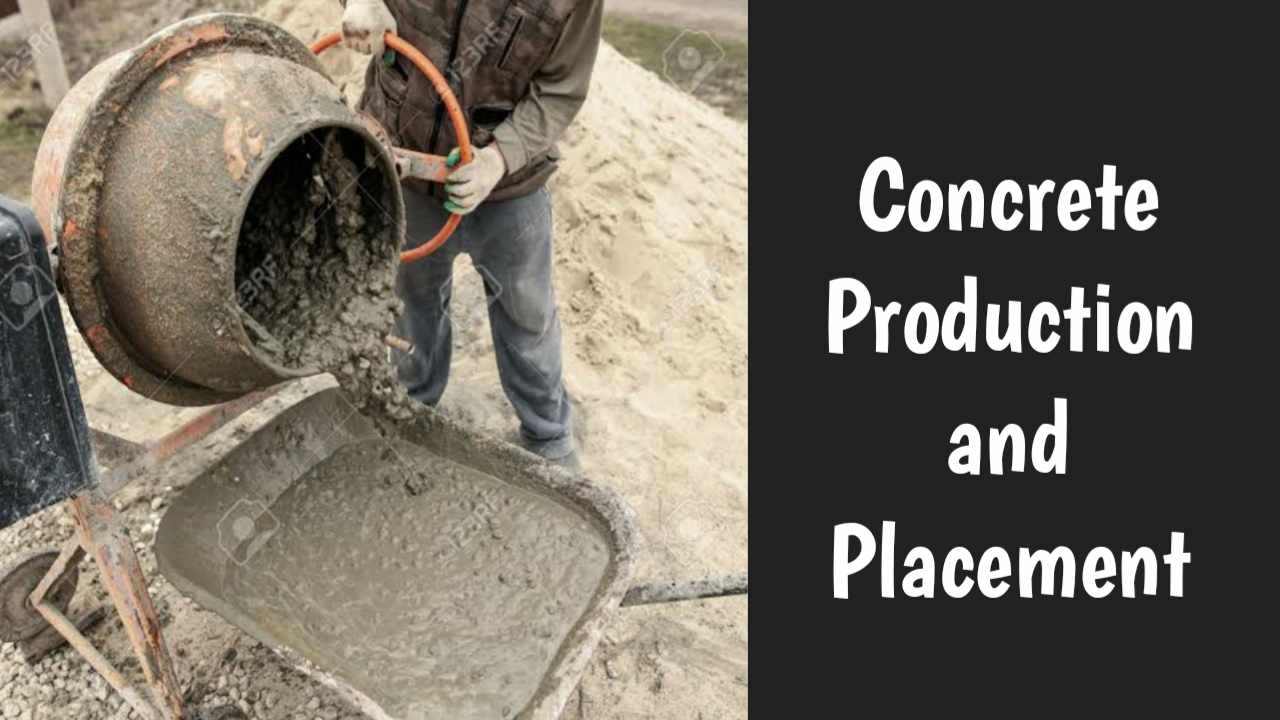 Concrete Production and placing Process includes following stages that are given below.

Batching is the process of measuring of material required for concrete mix by weight or volume.

Batching is done by two approaches.

Volume batching is done by a typical gauge box that is known as “farmas” in the field. The volume of farma is 0.035m3 which is similar to the volume of 1 bag of cement.

Farma is made of timber, steel or plastic materials.

Weight batching is done manually or semi-automatically, or fully automatically. Mostly it is used in Ready mix concrete plants.

This type of batching is mostly used for large construction.

In this way mixing of concrete done by the hands of workers. This type of mixing is used for small construction work due to high time consumption. Also the quality of the concrete we get very less.

In this way, the mixing of concrete done by various types of machinery. It is used for medium to large construction work for example 3 to 4 story building construction.

Three types of machineries used for mixing of concrete.

Now a day’s ready mix concrete become most popular for large construction because it gives high-quality concrete. Also, it gives the flexibility to do concreting work at the site where we can’t able to produce concrete like the valley, mountains region, etc.

In valley regions, concrete ingredients like cement, aggregate, sand, water, and other materials are not easy to available. So we need to transport material from other locations which increase the cost of construction.

In this type of mixing, concrete mixing is done in a ready mix concrete plant that is situated on-site or another site. In the case of the RMC plant situated in another place, the concrete can be transported by the transit mixer to the construction site.

It is economical for large construction.

There are various methods used to transport concrete. Few of its are given below.

A mortar pan is used for small construction work in which concrete or mortar can be transported by laborers using a mortar pan.

A transit mixer is suitable for long-distance concrete transportation. It is used to transport a large volume of concrete to the construction site which is situated a long distance away from the mixing plant.

It is used in concreting of skyscraper building.

It is used to convey concrete horizontally or inclined on the construction site.

Placing of concrete under water is done by various methods.

Compaction of concrete is a process in which concrete is compacted by various methods to remove entrapped air from the concrete and increase the strength of concrete.

By doing compaction of concrete, concrete becomes dense, impermeable due to that the durability of concrete increases.

Hand compaction of concrete is done by various techniques.

Mechanical compaction is done by various type of vibrating machineries which are given below.

Curing of concrete is defined as a process to maintain temperature and moisture of concrete during the hydration process of cement due to that hydration of cement completed and concrete gains maximum strength.

Curing of concrete done by various methods that are given below.

we already explain all techniques of curing of concrete in another article, so please go and see.

Also Read: What is curing || Methods of Curing of Concrete || Explained