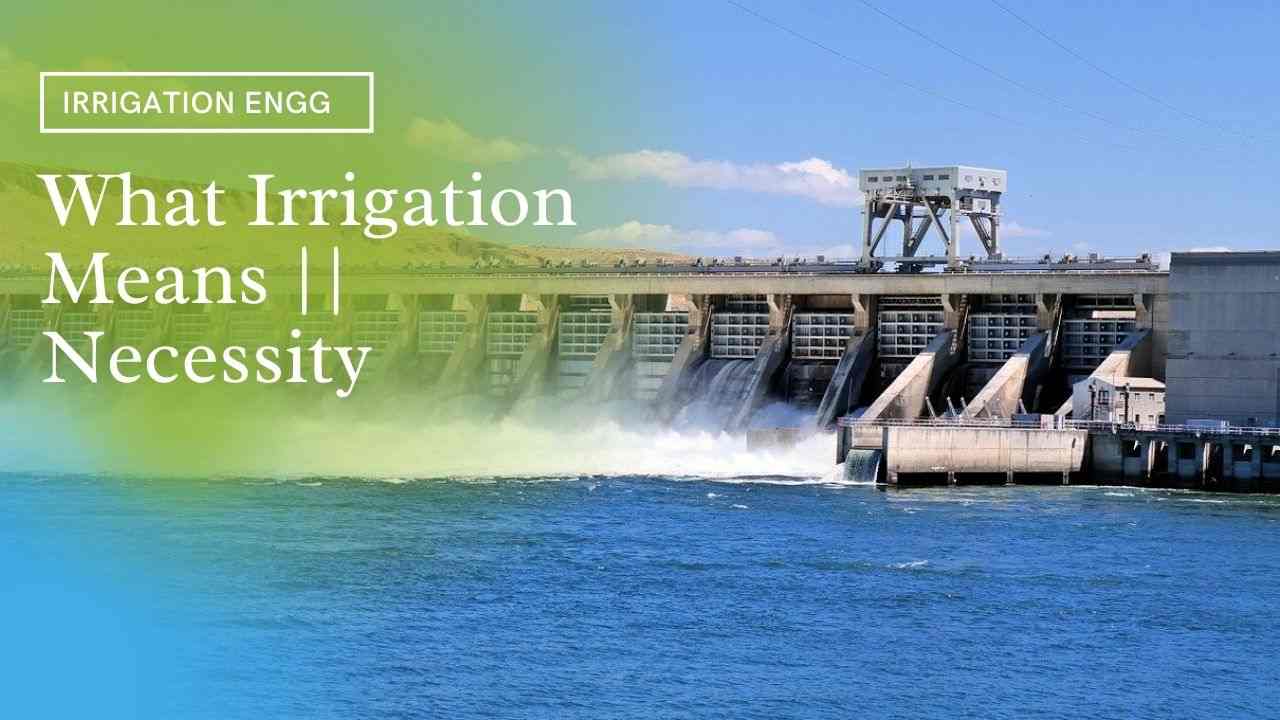 Plants require a water after sometime of interval like a human being.  The requirement of water is varies with types of plants. And water require until they grow up.

The Rain fulfils the requirement of water for the plants in a rainy season. The rain flooded water flow over the land, which is infiltrated in the soil. Due to that soil become saturated. And this saturation is used by the crop and plants during winter and summer season, which fulfil the water requirements of the crop and plants.

But the rainfall is varies every time, sometimes is causes flood due to high intensity of rain in a short period of time causing damages of crops. And sometimes no rain will occur during season, which is causes scarcity of water for the crops.

Irrigation defined as the science of artificial application of water to the land, in accordance with the crop requirement throughout crop period for full-fledged nourishment of the crops.

What is irrigation system?

The irrigation system is a manmade water management system, which is required to fulfill the water demands of the crop during less rainfall.

Rainfall varies with times and place. Some place no rainfall occur and some places have very heavy rainfall.

Now a day rainfall occurs irregularly which is causes floods or scarcity of water in a region and also damaged the crops.

The irrigation system is necessary to fulfill the water demand of crops during no rainfall or in case of scarcity of water.

Necessity of irrigation in India:

India is a tropical country with a vast diversity of climate, topography, and vegetation. In India, the Occurrence of rainfall, as well as its amount varies with places with time. Only a few months of the year rain will occur in India.

More than 70% of the Indian population depends on agriculture, and the remaining are also indirectly dependent on agriculture.  In India, about 184 million hectares of the geographical area is cultivable area. In order to fulfill the water requirement of crops till the growth of its in this large area, it is necessary to provide adequate artificial irrigation facilities in these regions of India.

Advantages of irrigation are as follows.

Irrigation helps in increasing crop yields, and hence, to attain self-sufficiency in food.

Due to different irrigation techniques, we provide water as per the requirement of the crop resulting we obtain maximum crop yield.

Hence we get maximum crop yield by optimum use of water.

In the area, where an irrigation system is not available, their farmers are preferably adopting mixed cropping. In mixed cropping, two or more crops are sowing together in the same field. If the weather is not favorable to one of the crops, it may be better for other crops. Hence the farmer gets some amount of crop yield, and it is economical.

But different crops required different field preparation, weather condition, manurings, etc. Also, the purity of the crop can be reduced due to mixed cropping.

Due to the well-designed irrigation system, we get a high revenue return which ultimately helps to develop the country and the prosperity of the entire nation.

The irrigation system consists construction of a large dam for irrigation purposes. And these dams are also useful for supply fresh water for domestic use at the nearest area.

The irrigation system consists of channels. These channels have an embankment and inspection path. These inspection paths are also used as a roadway to the village for cycles, bikes, etc.

Sometimes larger canals are provided in irrigation system which is also used for the communication.

Due to the irrigation system, trees are grown on an embankment or near the embankment which ultimately helps to reduce air pollution and erosion of soil. And also provide a good aesthetic view.