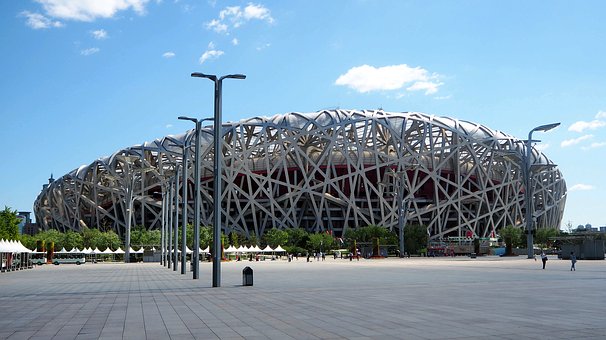 Beijing national stadium is official the national stadium of china. Beijing national stadium is also known as the birds nest. This stadium is located in Beijing China. This stadium is designed by Herzog &de meuron arupsport china architectural design & research group. This stadium is designed for Olympic. The Bird’s Nest sometimes has some extra temporary large screens installed at the stands of the stadium.
Located at the Olympic Green, the stadium cost US$428 million. The design was awarded to a submission from the Swiss architecture firm Herzog & de Meuron in April 2003 after a bidding process that included 13 final submissions.
PETRONAS TWIN TOWER( MALAYSIA) CLICK HERE
The stadium has a gross volume of three million cubic meters and is considered to be the world’s largest enclosed space. It is also the world’s largest steel structure with 26km of unwrapped steel used.
The innovative structure was designed by Herzog & De Meuron Architekten, Arup Sport, and the China Architecture Design and Research Group, and has been nicknamed the “bird’s nest” due to the web of twisting steel sections that form the roof.
A shopping mall and a hotel are planned to be constructed to increase the use of the stadium, which has had trouble attracting events, football and otherwise, after the Olympics.

During their first meeting in 2003, at Basel, the group decided to do something unlike Herzog and de Meuron had traditionally designed.
“China wanted to have something new for this very important stadium,” Li stated. In an effort to design a stadium that was “porous” while also being “a collective building, a public vessel the team studied Chinese ceramics.
The stadium consists of two independent structures, standing 50 feet apart a red concrete seating bowl and the outer steel frame around it.
In an attempt to hide steel supports for the retractable roof. Twenty-four trussed columns encase the inner bowl, each one weighing 1,000 tons.
Measuring 330 meters long, 220 meters wide, and 69.2 meters tall, the design of the Bird’s Nest stadium design is based on 24 trussed columns, weighing 1000 tons each. Due to their weight, no crane was strong enough to lift the columns into place when construction of the stadium’s steel outer shell began in 2005.
As a result, the columns were shipped in parts to Beijing and assembled in position. After all 24 columns were in place, smaller beams were welded between to give the structure greater strength and enhance the unique, elliptical crosshatch appearance.
Finally, the third set of beams was added in order to hang the transparent, polymer membrane, which provides roofing between the steel beams.

One crucial problem was whether, once in place, the 42,000 tons of steel required to build the structure would be able to support its own weight, or whether it would crumble once the 78 support pillars used during construction were removed. An 8.0 magnitude earthquake.

The architects and engineers also had to keep in mind the effects of thermal expansion, that is the tendency for steel to expand and contract as the temperature changes.

According To Research the production of new steel with low sulfur and low phosphor, which is high hardness steel able to bear stress 35*106 pascal.
This would be critical in the construction of the 24 trussed columns, each of which was 300 meters in length and expected to help bare a load of 11,200 tons.
Wuhan Iron and Steel group designed the second grade of steel that would make up the remaining portion of the stadium’s shell, referred to as Q460.
Q460 provided a high strength, but flexible, steel to support the trusses and ensure that the stadium’s shell would not become a 42,000-ton steel heap.

1.  The Bird’s Nest is approximately 333 meters (1092 feet) long from north to south and 296 meters (971 feet) wide from east to west, with the highest point of 68.5 meters (225 feet) and the lowest point of 42.8 meters (140 feet).
2.  The rainwater collected by the system of recycling rainwater on the top of the stadium can be used to afforest, flush toilets, control fire or flush the runway, which can save much water resources. Thus, the Bird’s Nest is known as a large Green Building without any doubt.
3. Located at the Olympic Green, the stadium cost about $428 million.
4. The bird’s nest can withstand an earthquake of up to magnitude 8 on the Richter Scale.
5. After the Games it will become the home stadium of Beijing Guoan Football Club and an auction will be held for the naming rights. It will cost 40 to 50 million yuan ($5.72 million-$7.15 million) a year to run.