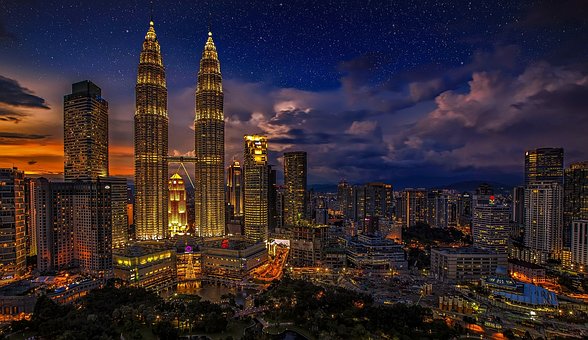 The towers feature a Double Decker sky bridge connecting the two towers on the 41st and 42st floors. The 88-floor tower are constructed largely of reinforced concrete, with a steel and glass facade are, a reflection of Malaysia’s Muslim religion.
Tower-1, the west tower was built by a Japanese consortium led by the hazama corporation. Tower-2, the east tower was built by a south korean consortium led by the samsung C&T corporation.

The Petronas  Tower’s   construction is started on 1 mar 1993 and completed on a 1 mar 1996. The Petronas  Tower’s   is located Kuala Numpur MALASIYA. The Petronas  Tower’s  structural system is a tube in tube design. Applying a tube-structure for extreme tall buildings is a common phenomenon.
The 88-floor towers are constructed largely of reinforced concrete, with a steel and glass facade designed to resemble motifs found in Islamic art, a reflection of Malaysia’s Muslim religion. Another Islamic influence on the design is that the cross section of the towers is based on a Rub el Hizb, albeit with circular sectors added to meet office space requirements. The tower evoke the image of  Quteb minar.
This was the first project in Malaysia where high strength concrete was specified. To achieve completion of the structural frame in approximately 28 months every floor needed to be constructed in approximately 4.3 days putting great pressure on the contractor to achieve rapid, delay free construction.
The towers were designed by Argentine architect César Pelli. Planning of this tower is started on a 1stJanuary 1992. The construction is beginning in 1992 with excavation.  which involved moving 500 truckloads of earth every night to dig down 30 metres (98 ft) below the surface. The structural approach in the tower frame combines the most favorable aspects of concrete and steel construction.
The building was officially opened by the Prime Minister of Malaysia‘s Tun Dr. Mahathir bin Mohamad on 1 August 1999.
The site for PETRONAS Towers is the Golden Triangle. Around it radiates the city of Kuala Lumpur, Malaysia’s capital. The jewel of this 100-acre site are the towers. Working within mixed-used development plan by U.S firm of Klages, Carter, Vail and Partners. The design drawings show a complex of buildings growing from an intimate relationship with the site, generating from its core. The concert halls provide an important gathering space.
The buildings were built on the world’s deepest foundations. 104 concrete piles, ranging from 60 to 114 metres (197 to 374 ft) deep, were bored into the ground. The concrete raft foundation, comprising 13,200 cubic metres (470,000 cu ft) of concrete was continuously poured through a period of 54 hours for each tower. The raft is 4.6 metres (15 ft) thick, weighs 32,500 tonnes (35,800 tons) and held the world record for the largest concrete pour until 2007. The foundations were completed within 12 months by bachy soletanche and required massive amounts of concrete.
GIFT CITY (Gujarat International Finance Tec-City (GIFT City)

Suria KLCC is a 140,000 m2 (1,500,000 sq ft) upmarket retail center at the feet of the Petronas Towers. It features mostly foreign luxury goods and high-street labels. Its attractions include an art gallery, an underwater aquarium and also a Science center. Boasting approximately 300 stores, Suria KLCC is touted as one of the largest shopping malls in Malaysia. The Petronas Philharmonic Hall, also built at the base of the towers, is frequently associated with Suria KLCC’s floorspace.

Spanning 17 acres (6.9 ha) below the building is the KLCC Park with jogging and walking paths, a fountain with incorporated light show, wading pools, and a children’s playground.

The bridge is 170 m (558 ft) above the ground and 58.4 m (192 ft) long, weighing 750 tons. The skybridge also acts as a safety device, so that in the event of a fire or other emergency in one tower, tenants can evacuate by crossing the skybridge to the other tower. There is a two hinged arch that supports the skybridge with arch legs, each 51 metres (167 ft) long, that are bolted to level 29 of each of the towers. Instead of being directly connected to the towers, the skybridge can shift or slide in and out of them to counterbalance any effect from the wind. Residing on the 41st and 42nd floors, the skybridge connects a conference room, an executive dining room and a prayer room.

1.   The Petronas Towers Can Withstand A Hurricane

The towers had to be able to withstand winds up to a speed of 65 miles/hour  about one-third the wind speed of Hurricane Katrina.

2.    Entry To The Petronas Towers Is Fiercely Limited

Free timed tickets are handed out daily although on a very limited basis. The queue starts early in the morning and eager patrons can expect to start queueing as early as 630am for a chance of acquiring a ticket. Guests however, also have an added option to purchase a ticket in advance.

The Petronas Towers reportedly took a total of 6 years and USD 1.6 billion to construct. The structure consists of 899,000 sq ft of stainless steel extrusions. Since this would naturally attract a lot of heat, 590,000 square feet of laminated glass was installed in order to reflect the harmful UV rays and reduce the heat. Cleaning every single glass panel – the equivalent of 10 football fields – would take almost two months.

Ø The pinnacles that top both towers stand 241 feet high. They consist of a spire, mast ball and ring ball.