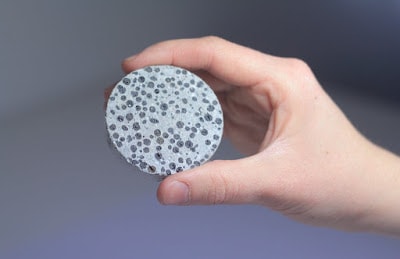 For the making of smart concrete have many approach. But for bio concrete use bacteria based healing concrete. This is also known as bio concrete. This kind of concrete uses simple process to close cracks.  The mechanism is achieved by making a concrete mixture with contains of (i) a precursor like calcium lactate (Ca(C3H5O2)2) and, (ii) bacteria planted in micro capsules (or just added to the mixture) that will later germinate,  once the water comes in cracks and contact  with cracks surface, the bacteria reacted  and they produce limestone (CaCo3) caused by the multiplying bacteria.  The bacterium goes into dormant state, when cracks occur in future by obvious reason, the bacteria get exposed to the air and water and they start precipitating calcite crystals. The spores of such bacteria have a thick cell which can help them to remain intact up to 200 years while waiting for a better environment to germinate.
This process of calcite precipitation is influenced by the decomposition of urea by bacteria, with aid of the bacterial urease enzyme. As a result of metabolism of bacteria species give urease, that catalyses urea to ammonia and carbonate. Further these components hydrolyze to carbonic acid and ammonium chloride that leads to the formation of calcium carbonate (calcite crystal).

The bacteria added in concrete mix. Concrete being extremely alkaline in nature, the bacteria added should fit in some special norms. The added bacteria should be able to withstand the harsh environmental conditions of concrete.
Types of Bacteria :-
Bacteria naturally occur in nature in various forms. They are present not only on the surface but also beneath the surface of the earth. The various bacteria that can be used in concrete are
Anaerobic Bacteria:-
If anaerobic bacteria like closely related specie of shewanella are added to concrete, the compressive strength increases from 25-30%3 .
Aerobic Bacteria:-
The various types of aerobic bacteria that can be used in concrete are:
• Bacillus pasteurii
• Bacillus sphaericus
• Escherichia coli
• Bacillus subtilis
• Bacillus cohnii
• Bacillus pseudofirmus
• Bacillus halodurans
• Bacillus massiliensis
USE DESKTOP SITE IN YOUR BROWSER FOR BETTER VIEW IN YOUR MOBILE.

Comparison Between Bio-Concrete And Ordinary Concrete :-

BENEFITS OF BIO-CONCRETE SERVE IN INDIA ;-

The climate of india is change from region to region  because of  it’s  topography. It observe wide range of change of temperatures from mountains, plains, forests, to  beaches. Many cities such as New Delhi, Lucknow, Patna, Varanasi etc. Observe very warm climate in april to mid june and cold climate between November to February. The change of extreme climate can deteriorate  the concrete surfaces and which may ultimately result in failure of structure. Bio concrete can be used as the best alternative for constructions in extreme climates. As India is a developing country, impressive infrastructure plays an important role so bio concrete can be used in the construction of crack resistant and durable high rise buildings and underground constructions. Apart from this bio concrete can be used for constructing structures meant for irrigation.